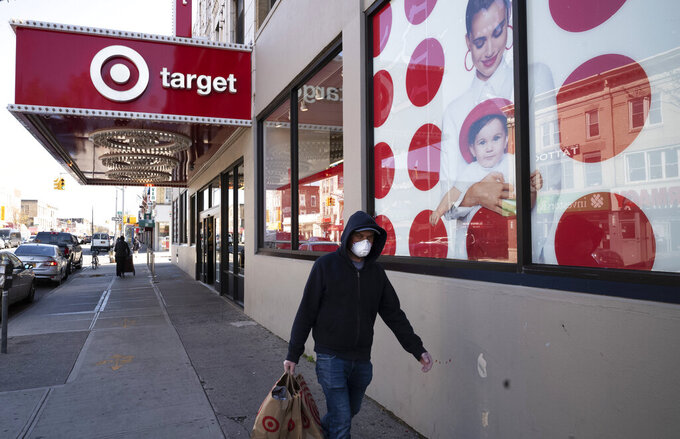 FILE - In this April 6, 2020 file photo, a customer wearing a mask carries his purchases as he leaves a Target store during the coronavirus pandemic in the Brooklyn borough of New York. Target has joined a growing list of major retailers that will require customers at all their stores to wear face coverings. The Minneapolis, Minnesota-based discounter said Thursday, July 16, that the policy will go into effect Aug. 1.(AP Photo/Mark Lennihan, File)

NEW YORK (AP) — Target, CVS Health and Publix Super Markets on Thursday joined the growing list of national chains that will require customers to wear face masks regardless of where cities or states stand on the issue.

Target's mandatory face mask policy will go into effect Aug. 1, and all CVS stores will begin requiring them on Monday. Publix Super Markets Inc., based in Lakeland, Florida, said that its rule will kick in on Tuesday at all 1,200 stores.

More than 80% of Target’s 1,800 stores already require customers to wear masks due to local and state regulations. Target will hand out masks at entrances to those who need them.

The announcements come one day after the nation's largest retailer, Walmart, said that it would mandate face shields for all customers starting Monday.

Retailers have hesitated to make masks mandatory nationwide out of fear of angering some customers over what, even in a pandemic, has become a political issue.

They have been reluctant to put employees in the position of becoming enforcers. Confrontations with customers and store employees have played out in multiple incidents caught on video.

It was difficult to enforce such rules even in states that mandate face masks. However, the recent surge of new virus cases — particularly in Florida, California, Texas and Arizona — has left them with no choice, retail experts say.

“To be clear, we’re not asking our store employees to play the role of enforcer, ” said Jon Roberts, the chief operating officer at CVS. “What we are asking is that customers help protect themselves and those around them by listening to the experts and heeding the call to wear a face covering.”