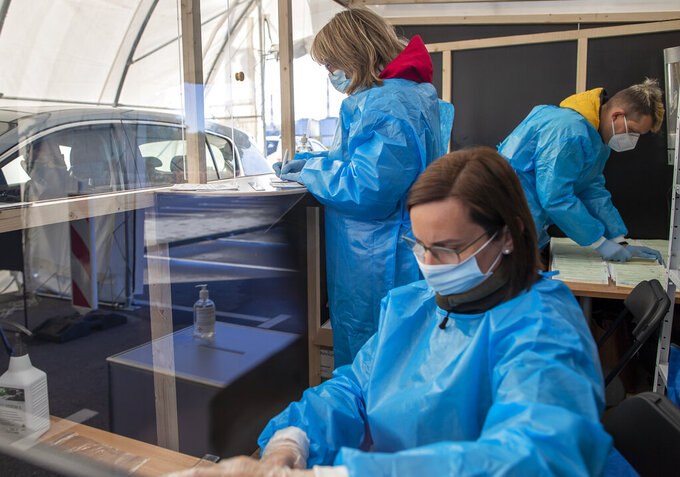 VILNIUS, Lithuania (AP) — Lithuanians started voted Monday in the second round of a national election, with some of them casting ballots from their cars in special drive-in polling stations amid a local spike in COVID-19.

Voters arrived alone in their vehicles as instructed, wore face masks and dropped their votes into ballot boxes. There are four such drive-in stations in Lithuania. Only those in isolation and on an official list can vote that way until Thursday. All other registered voters can cast their ballots in the runoff at regular polling stations on Oct. 25.

“This is very convenient. I only wish they would have done this from the very start and many more could have voted in the first round,” said Jonas, a former teacher who declined to give his last name.

The opposition conservative Homeland Union party claimed victory in the first round of the election, which was held on Oct. 11, while the Farmers and Greens Union, which forms the backbone of the current governing coalition, came in second. Analysts believe Homeland Union will be successful in the runoff and will be forming a new center-right coalition in the 141-seat assembly.

Under Lithuania’s election system, the remaining 68 lawmakers will be elected in a proportional vote in the second round.

So far, Lithuania has recorded 7,726 coronavirus cases and 113 deaths.

Earlier this year, Czechs citizens also cast their ballots from their cars, a measure forced by the coronavirus pandemic, in one of the 156 drive-in temporary voting stations across the country for those quarantined because of COVID-19 infections.