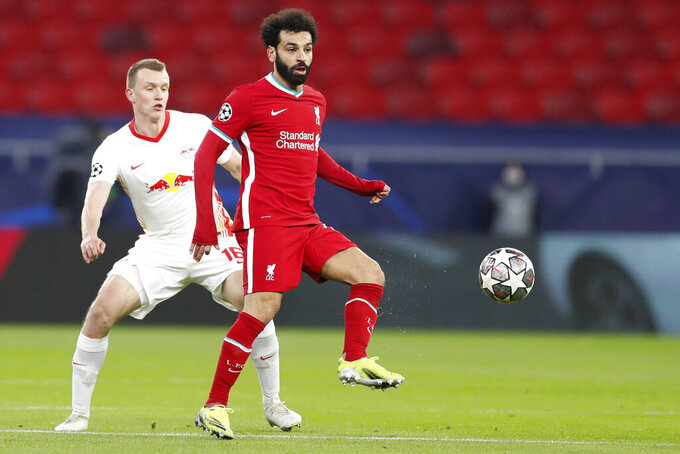 BUDAPEST, Hungary (AP) — With its Premier League title defense in tatters, Liverpool kept its last chance of a trophy alive by beating Leipzig 2-0 Wednesday to reach the Champions League quarterfinals.

Mohamed Salah and Sadio Mané scored Liverpool's goals to complete a 4-0 win on aggregate. Liverpool ended its run of six defeats in home games, at least technically, as Jürgen Klopp's team was officially the host at the neutral Puskas Arena in Hungary.

A string of saves by goalkeeper Peter Gulacsi — once a Liverpool player — kept Leipzig in contention before Salah made the breakthrough in the 70th minute. Salah lined up a low shot tucked inside the right post after Diogo Jota showed smart movement on the counter to create space for Salah before passing to the Egypt forward.

As Leipzig — which surprisingly reached the semifinals last season — tried to find a way back into the game four minutes later, substitute Divock Origi found space on the right flank to cross low for Mané to tap in.

The closest Leipzig came to scoring was when Alexander Sorloth headed against the crossbar in the 67th, before Liverpool responded with two goals to end the German team’s chances.

Just as in the first leg, Liverpool was gifted chances by defensive blunders. Leipzig has the fewest goals conceded of any team in the Bundesliga but couldn't reproduce that form in Europe this season, conceding 16 times in eight games.

A long ball from Thiago Alcantara found Salah free behind the Leipzig defense in the 24th before Gulacsi parried away the Egyptian's shot and Mané headed the rebound into the ground. Not long after, Diogo Jota beat Nordi Mukiele and found the Leipzig back line open in front of him before Gulacsi again saved.

At the other end, Alisson Becker stopped an early Leipzig attack, pushing away a shot from Dani Olmo in the 10th when Leipzig exploited Liverpool’s high defensive line to counter. Injury-hit Liverpool’s latest makeshift center-back pairing of Ozan Kabak and Nathaniel Phillips largely held firm, though Emil Forsberg went close when he beat Phillips dragged a shot wide of the post late in the first half.

Both legs were played in Budapest because of restrictions in Germany on travel from Britain amid the pandemic. Liverpool was barred from entering Germany for the first leg, and Leipzig would have had to put its players in quarantine after returning from Britain if Liverpool had hosted at Anfield.

This story has been corrected to show that Diogo Jota, not Sadio Mané, assisted Liverpool’s first goal.