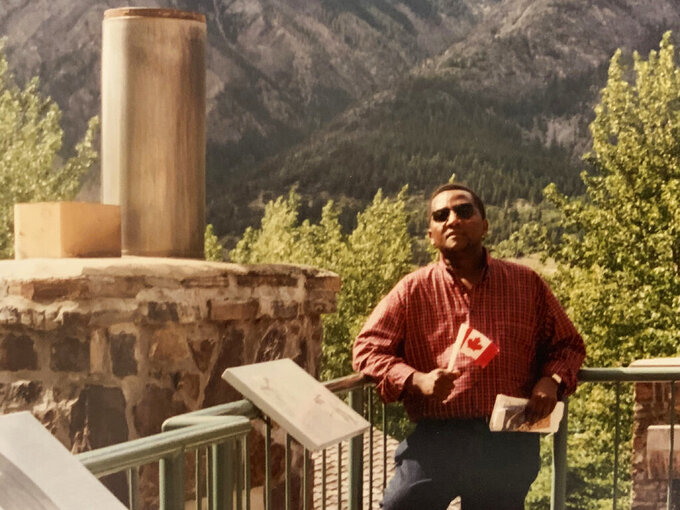 In this photo supplied courtesy of the Mini family the late South African doctor and activist Dr. Clarence Mini attends a conference in Canada in 1996. Clarence Mini, a South African activist and doctor who died of COVID-19 spent his life fighting apartheid, the government's denial of HIV/AIDS and rampant corruption. Loved ones say Mini knew the odds were against him but he was committed to what he believed was right. He died in May at age 69. (Photo courtesy of the Mini family via AP) 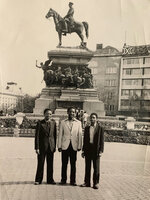 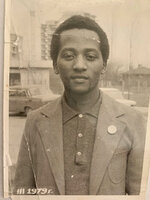 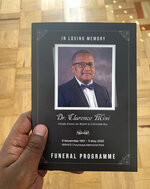 Loved ones say Mini, who recently died of COVID-19 at age 69, knew the odds were against him but never gave up, dedicating his life to the belief that all South Africans receive proper health care. They say he never became a cynic despite the struggles and made sure he had time for his four children — whether they were getting their driver’s licenses or a leadership post at school.

“He would always make time to celebrate those small milestones," his son Yandi Mini told The Associated Press. "He always supported what we were passionate about.”

Clarence Mini's warmth and his unwavering commitment to what he believed was right made him unique, loved ones said. His death on May 11 in Johannesburg led to a national outpouring.

At 25, Mini joined the armed struggle against apartheid, the brutal system of racial oppression enforced by the country's white minority, and secretly left South Africa in 1976. That year, the government opened fire on students in Soweto in a series of protests that left at least 176 people dead.

He joined the armed wing of the African National Congress and received military training in Angola. Only years later was Mini able to send a letter to his family saying he was alive and safe in exile.

He studied medicine in Bulgaria and qualified as a doctor, an achievement that would have been all but impossible for a black man during South African apartheid.

Ndumiso Ntshinga, who became friends with Mini in Bulgaria, described him as “a committed cadre and activist doctor.” He organized fellow African National Congress members to work on farms to raise money for others in exile, Ntshinga said.

When apartheid began to fall in 1990, Nelson Mandela and other political prisoners were released and the party became legal, allowing Mini and others to return home.

Instead of basking in the victory of democracy, Mini squared off against another foe: HIV/AIDS.

He quickly was at the forefront of the fight as the virus spread across South Africa, co-chairing the first national meeting of organizations fighting HIV in 1992.

Mini became a leader when many African National Congress members denied the existence of AIDS, longtime HIV activist Mark Heywood wrote in a tribute May 14 in the Daily Maverick, a South African news website.

“In those days, there was a deep reluctance to talk about HIV in the ANC. It took pioneers and mavericks like ... Mini to draw attention to the likely impact HIV would have on our country,” Heywood wrote.

South Africa's second elected president, Thabo Mbeki, who was in power from 1999 to 2008, refused to allow government hospitals to distribute life-saving antiretroviral medicine, which health experts said led to thousands of deaths.

Mini targeted that denial. He and his wife, Nancy, a nurse, opened an HIV clinic and treated patients for free.

After Mbeki was ousted, Mini crafted a new government response to the HIV pandemic as co-chairman of the national AIDS council. Today, the South African government provides free life-saving medication to more than 5 million people — the most of any country in the world.

In recent years, Mini became chairman of the Council for Medical Schemes, which regulates health insurers.

He was a strong proponent of universal health care in what's considered the most unequal country in the world.

“Universal health care is the way forward. We cannot afford a situation where only a small percentage of people have all the resources of a country being focused on them. We have to spread it out and cover everybody," Mini told the South African Broadcasting Corp. in 2017.

“It is a human right declared internationally by the U.N. and our Constitution. We have no choice, we have to cover everybody in health care,” he said.

Mini’s friends said he was frustrated by corruption, which became rampant under President Jacob Zuma and forced Zuma from office in 2018. Under Mini’s leadership, the Council for Medical Schemes investigated the health insurance industry amid allegations of corrupt ties between council officials and the entities they regulate. Last year, the council suspended at least five of its own executives.

Mini's frustration “came from the belief that it was not what many of us had fought the struggle (against apartheid) for. It made no sense to him why people would want to steal from the poor,” said Ntshinga, his colleague in Bulgaria.

Mini was admitted to a hospital on March 28, the day after South Africa declared a national lockdown over the coronavirus outbreak. He was in an isolation ward when he died, paining his family.

“The last moments were really tough, and we hardly ever saw or communicated with him," his son said. “Even the few hospital visits we had were tough, as we had to be heavily clothed with protective gear and were strictly monitored.”

Mini’s memorial service and funeral last month were restricted to fewer than 50 people because of virus restrictions, preventing many former colleagues from attending. Mini is survived by his wife, Nancy; son Yandi; and three daughters, Nandi, Nomhle and Yolisa.