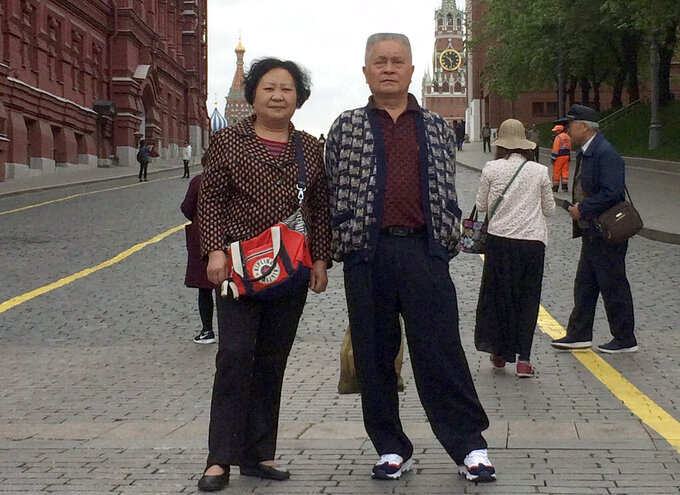 This May 13, 2019 photo provided by Liu Dong’e shows her and her husband, Wu Chuanyong, while visiting Moscow. Wu Chuanyong had been enjoying a peaceful retirement in the central Chinese city of Wuhan. The 68-year-old family patriarch began each morning with a stroll through the park and ended the day watching television dramas. Then the coronavirus hit, quickly spreading in Wuhan and around the world. (Courtesy Liu Dong’e via AP)

WUHAN, China (AP) — For more than a month, Wu Di did not know his father was dead.

Before a virus outbreak devastated Wuhan, 68-year-old Wu Chuanyong, who had worked as part of a mandatory rural labor program, had been enjoying a peaceful retirement in the central Chinese city. His days began with a morning stroll through the park and ended watching television dramas at night.

“He was thrifty and cared a lot about his siblings, whom he took care of when they were young, as he was the oldest," said the younger Wu, his 34-year-old son.

The family's Lunar New Year gatherings had always been filled with warmth, but this year was different.

It was late January, just before China’s most important holiday, when Wu Di and his mother came down with a 102.2-degree fever. Three days later, his father’s temperature also hit 102.2, and his mother-in-law started coughing.

A few weeks later, they all tested positive for the illness that would later be named COVID-19, caused by a new form of coronavirus that emerged first in Wuhan and has triggered a pandemic.

Wu and his parents were put on a hospital waiting list, but it would be a few days before they were admitted. An ambulance finally came to pick up Wu’s parents one evening past midnight, when Wu was already receiving treatment at another hospital.

The ambulance dropped off Wu’s parents at the hospital, and as they walked in Wu's father collapsed.

He never got up again.

Worried that it would interfere with his own recovery, Wu’s mother and wife concealed the news from him. He said he knew something was wrong, however, from his mother’s tone of voice over the phone.

Hi father was just an ordinary person, Wu said: “He couldn't have been more ordinary."

But Wu Chuanyong lived through an extraordinary period of Chinese history.

Wu’s parents were both “sent-down youth,” part of a mandatory program initiated by Chairman Mao Zedong in the mid-1900s that sent young people from the cities to labor in the countryside. They spoke often of the economic hardships they faced, how they had only broad beans to eat, cooked two ways: fried or boiled.

The elder Wu’s poor upbringing instilled in him an industrious thriftiness. At home, they rarely ate meat and seafood, and clothes were only replaced after they could no longer be worn. Wu Chuanyong was responsible for the family’s cooking and grocery shopping, and he himself worked in the food industry.

Despite his frugal nature, the younger Wu said his father always made sure the family had everything it needed.

The elder Wu largely kept to himself, but he maintained close contact with his siblings. He loved hiking in Wuhan’s Guishan Park, with its lush peaks and a view of the river. And like many elderly Chinese, he pestered his son for grandchildren.

Their quality of life had improved significantly as China's economy grew. After he retired, Wu and his siblings started going on group tours outside Wuhan. He and his wife even visited Russia and the United Arab Emirates last year.

Then the virus struck.

On Feb. 19, Wu’s mother was discharged from the hospital. She told Wu that both her and his father’s clothes were burned, in keeping with standard practice to prevent the spread of infection. Holding fast to a final shred of hope, he didn’t ask too much about his father.

Wu himself didn’t fully recover and leave the hospital until March. Two weeks after he was discharged, his wife Peng Jing said she needed to discuss a serious matter with him. There was no escaping reality then.

Wu doesn’t blame his family for keeping the news from him, but he regrets not being able to see his father one last time. It would have been impossible even if he had known, given the strict quarantine measures.

Peng Jing, with whom Wu just celebrated a one-year anniversary, is the only person in their family who didn't catch the virus. She encouraged Wu to “live like a hero” to emulate the character of his father, who was the family's backbone.

“The survivors must live on in order to carry on the lives of the dead,” said Peng.