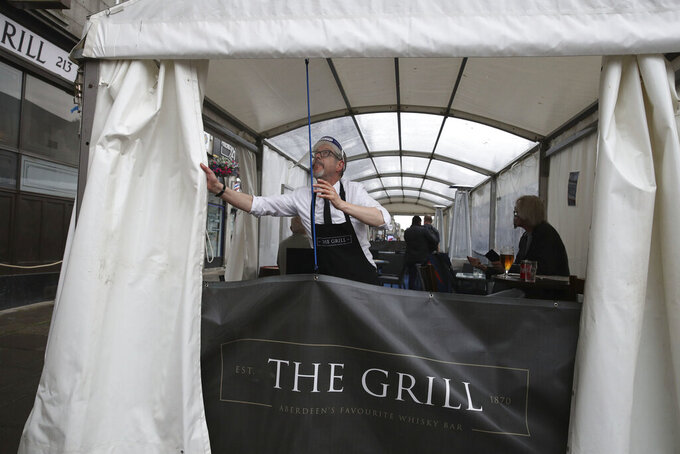 Keith McKenzie closesthe outside area of The Grill, after bars, cafes and restaurants were ordered to close as lockdown restrictions were reimposed due to a coronavirus cluster in the area, in Aberdeen, Scotland, Wednesday, Aug. 5, 2020. A five-mile travel rule has been put in place and residents are being told not to enter each other's houses as First Minister Nicola Sturgeon said over 50 cases have now been reported. (Andrew Milligan/PA via AP)

LONDON (AP) — Officials in Scotland ordered bars, cafes and restaurants in the city of Aberdeen to close Wednesday, reimposing anti-virus restrictions after a cluster of 54 COVID-19 cases in the area was linked to a single bar.

Aberdeen officials published a list of 28 bars and restaurants, three golf clubs and a soccer club visited by about 200 people so far traced from the cluster.

Sturgeon said all hospitality venues in the city of about 229,000 residents need to be closed by the end of business Wednesday. Visitors were advised not to travel to the city, and residents should not travel more than 5 miles (8 kilometers) from their homes unless for work or essential trips.

Entering other people's houses was also prohibited as part of the local lockdown.

Extra police officers will be on the streets in Aberdeen to ensure residents comply with the renewed restrictions, which will be reviewed in one week and may be extended, if necessary.

“The last thing we want to do is to reimpose these restrictions, but this outbreak is reminding us just how highly infectious COVID is,” Sturgeon said.

The official coronavirus death toll in the U.K. as a whole stands at 46,299. England has seen the largest increase in death rates in Europe.

Across Scotland, Sturgeon said a total 18,781 people have tested positive for the virus, up by 64 from the day before.

Also Wednesday, a scathing report by British lawmakers said that the scale and pace of infections in the U.K. could have been slowed down had the government imposed quarantine restrictions on travellers earlier on during the pandemic.

The report by the Home Affairs Committee said some 10,000 people with COVID-19 may have entered or returned to the country in March - when the infection rate in Spain, Italy and France was rapidly increasing.

“The U.K. was almost unique in having no border checks or quarantine arrangements at that time,” committee chair Yvette Cooper said.

Britain asked travelers from some countries to voluntarily self-quarantine in February and early March, but the government lifted all border restrictions on March 13. A mandatory quarantine was introduced in June, but many countries were later added to a “safe list” exempted from the requirement.

A government spokeswoman said the committee’s claims were “incorrect” and that all public health policy has been “guided by the science.”