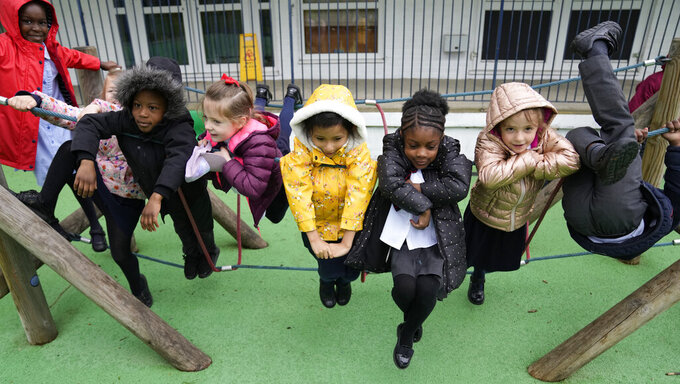 Faith, left, with some of her fellow pupils Julia, Nana, Yaw, Alexandra, Leandra, and Amariah, right play on a rope swing at the Holy Family Catholic Primary School during a break, in Greenwich, London, Wednesday, May 19, 2021. Holy Family, like schools across Britain, is racing to offset the disruption caused by COVID-19, which has hit kids from low-income and ethnic minority families hardest. (AP Photo/Alastair Grant)

LONDON (AP) — Nik Geraj’s voice fills with pain as he talks about how he struggled to help his daughter study during the coronavirus lockdowns that shut her school for more than four months over the past year.

Before the pandemic, 6-year-old Mia was doing well. But she had a hard time during lockdown, missing her friends and teachers at Holy Family Catholic Primary in southeast London. Geraj, a former refugee from Albania, and his wife Mai Vu, who comes from Vietnam, weren’t able to fill the gaps.

“She really missed out,” he said. “I don’t think I did such a good job. I tried. The missus tried.’’

Plagues, fires, war — London has survived them all. But it has never had a year quite like this. The coronavirus has killed more than 15,000 Londoners and shaken the foundations of one of the world’s great cities. Amid a fast-moving mass vaccination campaign, The Associated Press looks at the pandemic’s impact on London’s people and institutions.

Schools across Britain are racing to offset the disruptions caused by COVID-19, which has hit kids from low-income and ethnic minority families the hardest. At Holy Family, an after-school math club, a new reading area and a focus on exercise and fresh air are some of the ways the staff is making up for lost time.

Students across England lost an average of 115 days of in-school instruction to the pandemic, curtailing academic progress and hampering the social and emotional development of students from all backgrounds. But children stuck inside cramped apartments without easy access to computers suffered the most, fueling concerns about rising inequality in a country where 800,000 people have lost their jobs and food bank use is soaring.

Even before COVID-19, students from disadvantaged backgrounds were about 18 months academically behind their wealthier classmates by the end of secondary school. That gap is likely to have widened over the past year, according to the Education Policy Institute, a London-based think tank.

This may be one of the longest-lasting impacts of the pandemic, said Arun Advani, an assistant professor of economics at the University of Warwick whose research focuses on inequality.

“It is going to create a kind of set of knock-on effects that will continue in the years to come, because it will be these kids who had very different experiences and different amounts of learning,” Advani said. “There will be kids who just are further behind.’’

That focuses the agenda for schools like Holy Family, a state-funded Catholic school in the London borough of Greenwich, home of the historic Cutty Sark clipper ship and Greenwich Mean Time.

Some 28% of Holy Family’s students qualify for free school meals. English is the second language for almost two-thirds of the children, who have roots in Africa, the Caribbean, South Asia, South America and other European countries.

While every school has its own pandemic story, Holy Family’s is marked by pain.

Months before anyone had ever heard of COVID-19. Doran-Hannon was dispatched to get the school back on track amid turmoil from previous management. Funds were spare. The school had eight laptops for more than 160 students.

Her sidekick was Sarah Hancock, who had 22 years of experience in nearby Bexleyheath. But then Hancock died on the first day of lockdown in March 2020. Though it was not COVID-19, the bereavement shook them all.

“That was really quite hard,’’ Doran-Hannon said, her voice trembling. “That added a whole dimension to COVID that we just genuinely didn’t expect.”

Amid grief, the staff set to work.

After initially sending paper study packs home with students, they adjusted to online learning as the first lockdown stretched through April and May 2020. Staff members regularly phoned students and parents, letting them know they weren’t alone.

When they realized kids were going hungry over Christmas, the school organized a food bank that helped more than 60 families. Since the hardship didn’t end with the holidays, they created a permanent food cupboard with long-life products for anyone who needs help, no questions asked. And when students needed laptops for home learning, they went looking for a benefactor.

An events manager who found herself without much work during the pandemic, Parslow persuaded businesses to donate old computers when they upgraded. The project exploded, and now about 20% of England’s schools have asked to be on her donation database.

“If you give schools everything they need to do the best possible job that they can, then grades have to go up,'' she said.

The Education Policy Institute estimates that schools in England need an extra 10 billion to 15 billion pounds ($14 billion to $21 billion). So far, Prime Minister Boris Johnson’s Conservative government has authorized 1.7 billion pounds, or about 250 pounds ($354) per student.

The Times of London, citing a leaked report, said Tuesday that the U.K. government is planning a 15 billion-pound education recovery program focused on extra class time, teaching and tutoring.

But creativity can be as important as money.

Holy Family's pandemic response includes a new addition to its campus: a bright green shack decorated with yellow letters that is the “Little Pop-up Book Hut.”

Stocked with titles like “Hyena Ballerina” and “Polka Bats and Octopus Slacks,” it sits under a shady tree next to a new deck where students can read outdoors with their friends. Hancock’s family helped raise the money for the project, passing along her love of literature.

Then there’s the math club, which helps kids build confidence with numbers.

On a recent afternoon, the club gathered on the playground for a game that mixed bean bag tossing with multiplication practice. When a sudden downpour struck, the 11-year-olds played on, laughing and tossing sodden bean bags at a chalk target even as the lines bled into rivulets of color.

Behind it all is Doran-Hannon’s prescription that teachers must get to know each child individually and show them the school cares.

Walking through the halls, she notices a student whose shoe is untied. Although she’s wearing a skirt and heels, the principal immediately drops to his level and pats her knee for him to put his foot there so she could tie the offending laces.

The boy ducks his head sheepishly. He ties the shoe himself.

“It is very much about knowing those children, knowing what they are, what they stand for and what they can achieve,” she said later. “I think if I build that into them, if I build that desire to be great at whatever they do, then we will succeed.”

The Geraj family has weathered the pandemic better than many.

Nik Geraj, 41, kept his job at a supermarket and Mia had a tablet. They also had Mia’s teacher, Ruth Monkman, who called every week just to see how everyone was getting on.

Now that Mia is back in school, her dad can think of the future. He hopes her life will be easier than his.