Long-haul carrier Emirates to ship aid for free into India 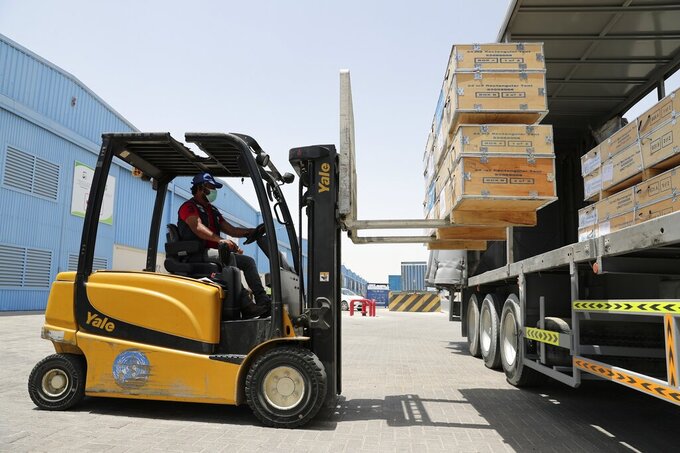 A forklift driver loads material for temporary shelters to be sent to India, at the UNHCR warehouses, part of the International Humanitarian City, in Dubai, United Arab Emirates, Sunday, May 9, 2021. Dubai's long-haul carrier Emirates will begin shipping aid from the World Health Organization and other groups into India for free to help fight a crushing outbreak of the coronavirus, the airline said Sunday. (AP Photo/Kamran Jebreili)

DUBAI, United Arab Emirates (AP) — Dubai's long-haul carrier Emirates will begin shipping aid from the World Health Organization and other groups into India for free to help fight a crushing outbreak of the coronavirus, the airline said Sunday.

The offer by Emirates, which has some 95 flights weekly to nine cities in India, initially involves aid already in Dubai but may expand across the carrier's network as time goes on. That could mean major savings for aid groups as airfreight costs have skyrocketed amid the pandemic. Demand for flown cargo stands at record levels worldwide.

Emirates made the announcement at Dubai's International Humanitarian City, already home to a WHO warehouse that's been crucial to the distribution of medical gear worldwide. A WHO worker on a forklift moved boxes of tents made in Pakistan and rolls of net shades from South Korea preparing for the initial flight planned for Thursday. That will be used to construct field hospitals for India's overwhelmed health care system.

Nabil Sultan, the divisional senior vice president for Emirates SkyCargo, said the initial priority would be shipping aid out of Dubai, rather than elsewhere from its network. While airfreight costs stand at record prices, Sultan said offering free shipping for aid to India now was important for an airline that has flown to the South Asian country since the carrier's founding in 1985.

“Our relationship with India in particular goes a long way and at times like this, I think it’s absolutely essential that we make sure that essential commodities get to India and to the Indian people,” Sultan told The Associated Press. "This is the time for us to give back.”

As India has grown into an economic power, so has Emirates and its base of Dubai International Airport, the world's busiest for international travel. The airline serves as a key link in East-West travel.

Passenger numbers from India for Emirates, just under 3 million in 2008, grew to 5.5 million a decade later. That's some 10% of Emirates overall annual passenger load, with more coming from the surrounding countries on the subcontinent. Millions of Indians also live in the United Arab Emirates and comprise a key part of its labor force.

Then came the pandemic and the fierce outbreak now burning through India. Infections have surged there since February, fueled by variants and the government's permission for massive crowds to attend religious festivals and political rallies. On Saturday alone, India reported over 400,000 new cases and more than 4,000 deaths. Since the pandemic began, India has reported 21.8 million cases and nearly 240,000 deaths, though experts say even those figures likely are undercounts.

The UAE banned in-bound passenger flights from India in late April, though cargo flights continued and passenger planes return with their seats now empty. Emirates already had been shipping in masks, gloves and other protective gear, as well as diffusers as oxygen remains in short supply for those gasping to breath in the throes of the virus, Sultan said.

As the Indian diaspora tries to send in more aid, Sultan said the airline would evaluate whether to expand the program to include shipments coming from outside of Dubai as well. Operating with groups already in Dubai ensure that they have the right paperwork and contacts to make sure the most vital aid reaches there first, he said.

“As a phase two and three, we will be looking at a range of opportunities for people to sort of donate if they wish, where we can provide capacity to those sort of donations and move them to India,” Sultan said.

All this comes as air cargo has reached record levels after flights around the world halted when the pandemic first took hold. The International Air Transport Association, an aviation trade organization, said in March it saw the highest levels of demand ever as the world's economy slowly began to pick up.

Per pound, costs for airfreight worldwide are up by some 75%, according to data provider WorldACM. That's as airlines like Emirates still have jumbo jets sitting on tarmacs, waiting for demand and international restrictions to lift to restart routes. Dozens of Emirates' double-decker Airbus A380s stood parked at the nearby Dubai World Central's Al Maktoum International Airport.

Robert Blanchard, who oversees the emergency operation in Dubai for the WHO, praised Emirates for offering the free cargo flights. His warehouse continues to juggle aid for the coronavirus while shipping out gear for cholera and Ebola outbreaks with just eight staffers. He warned that while countries in the West and in the UAE enjoyed quicker access to vaccines, what India faces serves a warning to the rest of the world.

“There’s a long way to go before we get back to normal," Blanchard said. "And although the vaccines offer a lot of promise, what we’re seeing is that the quantities that are available and the rate of distribution is simply not enough to handle the pandemic.”