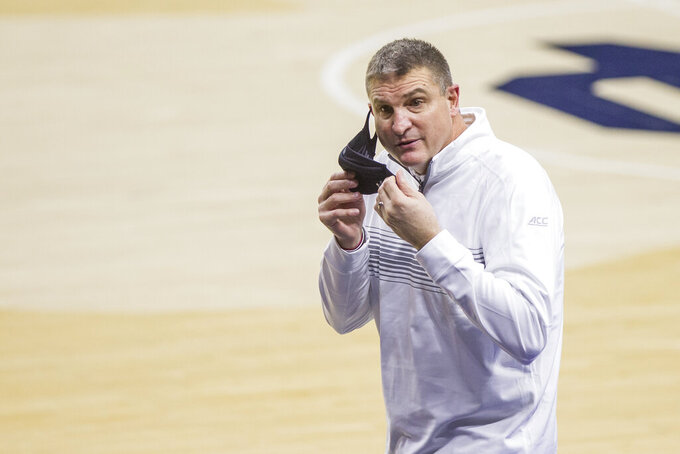 BOSTON (AP) — The last time Scott Spinelli took over a basketball team was a decade ago, when he was an assistant at Maryland and head coach Mark Turgeon picked up a pair of technical fouls at Miami.

It is Boston College that will be rallying for its head coach on Saturday, when the Eagles (3-13, 1-9 Atlantic Coast Conference) face Notre Dame (9-12, 6-9) in their first game since Jim Christian was fired. Spinelli took over on Feb. 15 as interim head coach after 25 years — his entire college coaching career — as an assistant.

“Everything has happened so fast,” Spinelli, who has been friends with Christian since college and served as his top assistant at BC since 2014, said in a telephone interview on Friday.

“He's a great man and it's just an unfortunate situation. We've all had to rally around one another,” Spinelli said. “The kids are the most important part of this whole equation. Our staff has been phenomenal. Every guy that has committed to getting these kids better. The staff is really working closely together to keep on this path.”

A Massachusetts native who was on the Mike Jarvis-coached Boston University team that went to the NCAA tournament in 1988, Spinelli has earned a reputation as a star recruiter who brought in often unheralded high schoolers and turned them into NBA prospects. In all, he has helped recruit or coach six future NBA draft choices or rookie free agents, including DeAndre Jordan and Khris Middleton at Texas A&M, Alex Len at Maryland and Jerome Robinson at BC — the school's first-ever lottery pick.

Asked if he was hoping to use the interim position as a showcase for a head coaching job, Spinelli said he wasn’t thinking about that at all.

“The last thing that this is about is me,” Spinelli said. “This is about the kids, the kids who have gone through a lot this year, just like a lot of other teams.”

Actually, quite a bit more than many teams.

Boston College paused its men's basketball the program during a coronavirus outbreak in January, canceling five games over 21 days. When they were ready to resume, the Eagles had just four scholarship players — and later still only six — along with a handful of walk-ons.

“We've gone through a lot of adversity with COVID; a lot of kids have been out, in isolation and sick,” Spinelli said. “If you look at what’s going on in the world, with what we’ve gone through as a society, it’s been a hard time for everyone. And for us to get a chance to play basketball right now — the players and the coaches — that we all love to do, we're blessed.”

Spinelli said all but four players will be available for Saturday's game against Notre Dame, which will be the home finale for five BC seniors. It will also be his first — and possibly only — home game in the No. 1 chair this season.

Barring further COVID postponements, the Eagles will have two more road games — at Florida State and at Miami. The ACC tournament is scheduled to start March 9 in Greensboro, North Carolina; the Eagles enter the last week of the regular season in last place in the conference.

“Our goal is to get into that ACC tournament on an up note," Spinelli said, “and to try to make a run.”