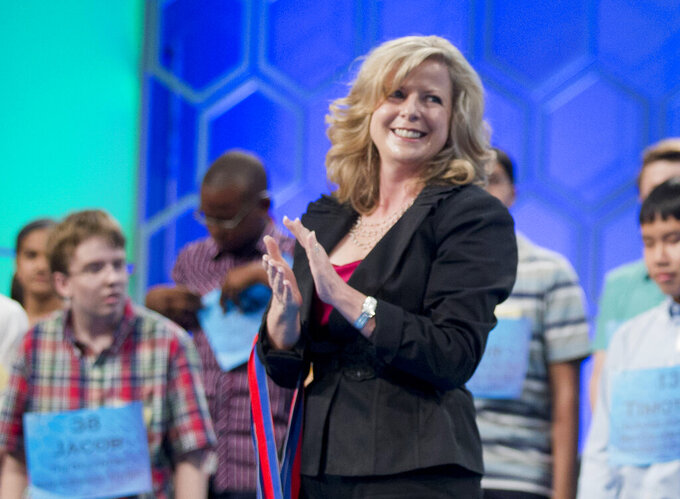 FILE - In this May 29, 2014, file photo, Paige Kimble, executive director of the Scripps National Spelling Bee, applauds during the Scripps National Spelling Bee at National Harbor in Oxon Hill, Md. On Monday, Dec. 7, 2020, Scripps announced that Kimble is stepping down after 22 years in charge of the world’s preeminent spelling competition. (AP Photo/Manuel Balce Ceneta, File)

The longtime executive director of the Scripps National Spelling Bee has stepped down.

Kimble's final year on the job ended up being the first year without a bee since 1945. The event was canceled because of the coronavirus pandemic. It is normally held in late May at a convention center outside Washington and includes hundreds of spellers from around the country, along with a handful of international competitors. ESPN televises the final rounds of the bee.

Cincinnati-based Scripps has yet to announce plans for next year's bee, but schools have been holding competitions this fall that serve as the first steps toward qualifying. Kari Wethington, a Scripps spokeswoman, said Monday that “the bee team is planning to host a competition in 2021.”

Like many others with prominent roles in staging the bee, Kimble is a former speller. She won the bee in 1981. A year earlier, she finished second to Jacques Bailly, who is now the bee's longtime pronouncer.

Kimble began working for Scripps in 1991, shortly after graduating from college, and became executive director in 1998. During her tenure, the national exposure on ESPN and the quirky charisma of the young spellers, who can compete through the eighth grade, have led to increased popularity for the competition.

In order to win, spellers must demonstrate a mastery of roots, definitions and language patterns that allows them to figure out even those rare words in the dictionary they haven't seen before. Spellers devote hours a day for years of their lives to preparing for the bee, often working with private coaches, and use study guides that have taken some of the mystery out of the Scripps word list.

In the past two decades, most of the winners of the bee have been Indian-American, many the children of highly educated first-generation immigrants.

Last year's bee ended in an unprecedented eight-way tie after Scripps ran out of words difficult enough to challenge the elite spellers remaining on stage. Some observers argued that the bee had failed in its mission, but Kimble characterized the result as a triumph.

“Look at these kids. They worked so hard and they achieved so much,” Kimble said at the time. “I think it’s the best night ever for the bee.”

Carolyn Micheli, a senior vice president with the company who's not part of the regular bee staff, will fill Kimble's role on an interim basis, Scripps said. The company said it would conduct a national search for a new director while also considering internal candidates.