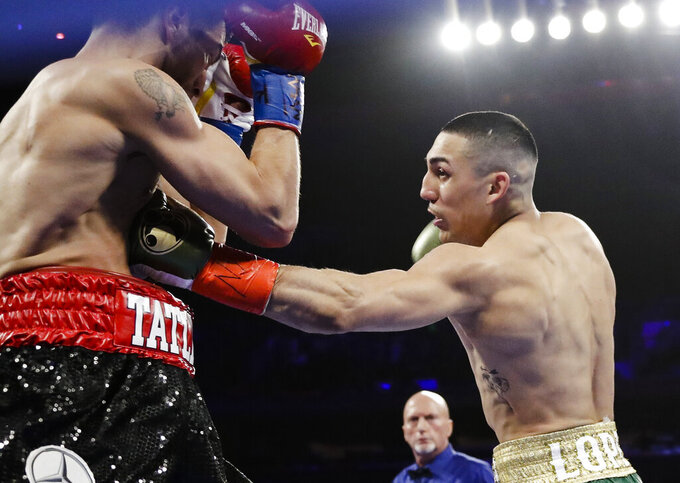 FILE - In this April 20, 2019, file photo, Teofimo Lopez, right, punches Finland's Edis Tatli during the first round of a boxing bout in New York. Lopez is symptomatic after testing positive for COVID-19, and his bout with mandatory challenger George Kambosos has been postponed until Aug. 14. Lopez and Kambosos were scheduled to fight Saturday night at the Miami Marlins' home stadium. (AP Photo/Frank Franklin II, File)

LOS ANGELES (AP) — Lightweight champion Teófimo López is symptomatic after testing positive for COVID-19, and his bout with mandatory challenger George Kambosos has been postponed until Aug. 14.

López and Kambosos were scheduled to fight Saturday night at the Miami Marlins' home stadium. The entire card has been pushed back eight weeks, according to Triller Fight Club co-founder Ryan Kavanaugh.

Both Kambosos and Bob Arum, López's estranged promoter, criticized the lightweight champ Tuesday for falling ill so close to the bout. Arum ripped López for apparently refusing to be vaccinated.

“Now, with the vaccination (available), anybody (who) gets COVID, shame on them,” the 89-year-old Arum said in Los Angeles, where he was promoting heavyweight champion Tyson Fury's third fight with Deontay Wilder. “Shame on them because they hadn't taken the time, or they decided for some crazy reason not to get vaccinated. That's nuts.”

López (16-0, 12 KOs), a Brooklyn native, won the IBF lightweight title in December 2019. He became a rising star last October with a stunning upset of veteran Ukrainian lightweight champ Vasyl Lomachenko, winning a decision in the first major fight card after the start of the pandemic.

In a social media post, Kambosos (19-0, 10 KOs) said he was “absolutely devastated” by the postponement. The Australian challenger lamented a 13-week training camp away from his children and said he had flown his pregnant wife to Miami for the fight.

“I put every bit of my life into this camp with my team,” Kambosos wrote, addressing López. “I would have been Undisputed Champion this weekend. I know it and you know it. Your actions and decisions have affected not only our fight but everyone involved in this fight! Pure irresponsibility on your whole side. Our time will come and I promise you and the world that I'm going to take you out worse than ever for everything.”

López and Arum have been at odds since Triller made a hefty $6 million purse bid to secure the right to promote López's mandatory title defense against Kambosos. Arum said Top Rank recently restructured López's contract, but the promoter — who also promotes Lomachenko — is clearly upset with López.

“We tell all our fighters, ‘You guys are fighting for big money, and promoters are laying out big money,’” Arum said. “Get yourself vaccinated so you don't contract the COVID. You take the two fighters here (in Los Angeles). Fury is totally vaccinated ... and Wilder has been fully vaccinated, and their corners have been vaccinated. That's taking responsibility. Teófimo, there was no reason why, before he went into training, he didn't get vaccinated. No reason. And if he had gotten vaccinated, he wouldn't have lost this payday.”

Triller will have to find another location for the show, because the Marlins are at home against the Cubs on Aug. 14.

Saturday is still a busy boxing day, even with the postponement.