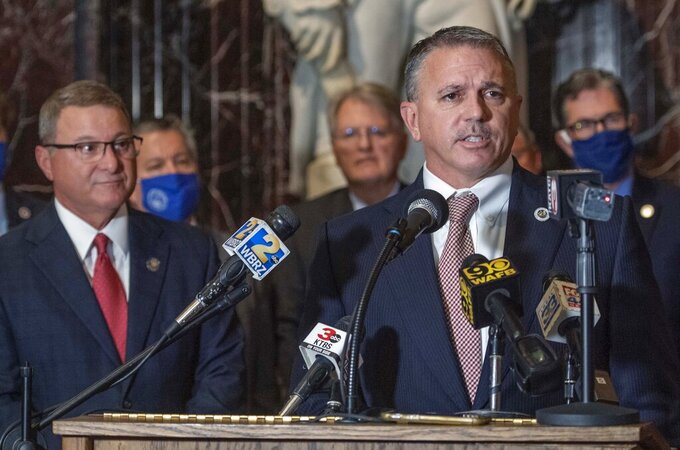 BATON ROUGE, La. (AP) — Louisiana Gov. John Bel Edwards agreed to nearly all of the $20 million-plus in pet projects that lawmakers inserted into this year's budget in their special session, announcing Friday that he stripped only a handful of the add-ons decided behind the scenes by legislative leaders.

The Democratic governor used his line-item veto to remove five legislative earmarks totaling $718,000, including dollars for the South Louisiana Wetlands Discovery Center, a dog park at the East Houma airbase, security cameras in Houma, a lighthouse in Madisonville and a water system project in Grant Parish.

In his veto letter, Edwards gave little explanation for what he chose to strike from the budget, except saying the wetlands center had already received other state financing.

Dozens of local pet projects will receive state funding, including dollars for a city sports complex in the Baton Rouge area, New Orleans crime cameras, local roadwork and allocations to individual towns with little explanation of how the money must be spent.

Many of the local projects appear to be in or near the districts of legislative leaders.

Lawmakers crafted the list in private, most of the earmarks added by six lawmakers negotiating a final version of the budget bill. The items weren't publicly vetted, and it appeared no specific method was used to determine which projects made it into the bill besides getting support from the House and Senate's GOP leaders.

In the House, several Republican and Democratic lawmakers criticized the secretive way the projects were slipped into the budget — and suggested the spending was inappropriate amid the coronavirus pandemic, a nearly bankrupt state unemployment trust fund and back-to-back hurricanes.

Despite the complaints, the budget bill passed easily in the special session that ended last month, with a House vote of 87-13 and a Senate vote of 31-0.

Senate President Page Cortez, a Lafayette Republican, and House Appropriations Chairman Jerome “Zee” Zeringue, a Houma Republican, defended the projects. They said most of the dollars will pay for local infrastructure and drainage work, and assist police officers and firefighters who have had to respond to multiple hurricanes and COVID-19.

The budget bill also steered $85 million to the unemployment trust fund, which has been drained to provide aid to hundreds of thousands of Louisiana workers forced out of jobs during the pandemic.

Beyond the five projects, Edwards also vetoed language that would have given lawmakers more authority to determine how $3 million in additional funding provided to public defender offices could be spent.

The budget bill is filed as House Bill 39.