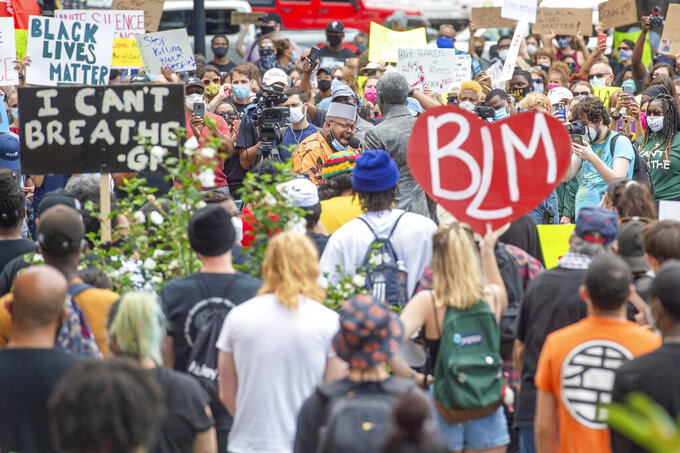 Protesters rally in solidarity with those in Minnesota over the killing of George Floyd by police, in Lafayette, La. Sunday, May 31, 2020. (Scott Clause/The Daily Advertiser via AP)

BATON ROUGE, La. (AP) — Gov. John Bel Edwards on Wednesday thanked the people of Louisiana for holding peaceful demonstrations in the aftermath of George Floyd's death. The state has avoided the violence and property damage seen in other parts of the country.

“Almost without exception, every single person who’s shown up to protest and demonstrated has done so in a way that is an appropriate expression of their concerns about this,” Edwards said. He added: “I happen to think that, as a result, their voices are actually being heard better.”

The Democratic governor said he doesn’t expect to use the Louisiana National Guard, which has been aiding in the state’s coronavirus emergency response, to assist local and state police in their response to the Floyd protests.

Cities across Louisiana have seen demonstrations numbering from a few dozen people in some areas to thousands in others, calling for change in policing methods and the national dialogue on race in response to Floyd's death in Minnesota. The black man died after a white police officer pressed his knee to Floyd’s neck for several minutes.

Edwards, who comes from a family of sheriffs, has called the police officer's response “egregious” and unacceptable. He called the tactics used “a gross departure from what is normal” in policing. He said the other officers involved should have intervened to stop the pressure on Floyd's neck.

Louisiana's governor has declined to comment on President Donald Trump's response to the protests around the country. He's credited faith-based, community and political leaders with helping to keep his state's demonstrations peaceful so far, and he said law enforcement has done a good job working with protest organizers and responding to those who have shown up at demonstrations.

The Baton Rouge area saw a series of tense, but largely nonviolent protests in 2016 after the killing of Alton Sterling, a black man who was shot six times by a white police officer outside a convenience store. The officer was not criminally charged, but was fired.

“What I expect is that we will continue to see peaceful, nonviolent demonstrations and protests where people properly exercise their First Amendment rights," the governor said.