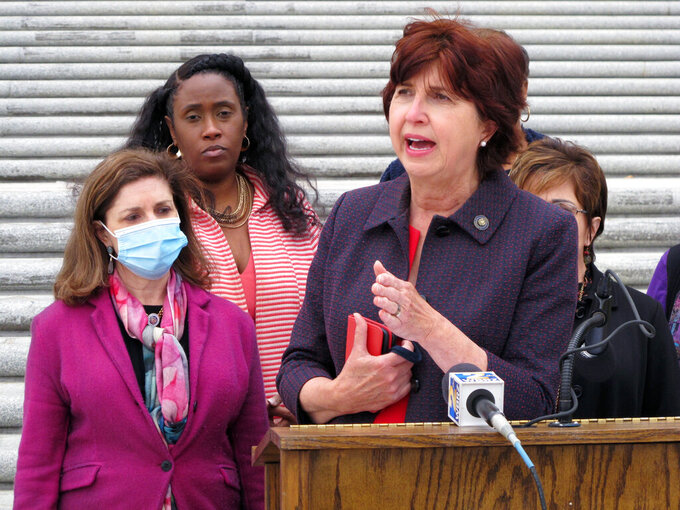 BATON ROUGE, La. (AP) — Louisiana lawmakers return Monday to the state Capitol for their first full-length regular session since the pandemic began and with far more topics than the coronavirus on the agenda.

House Speaker Clay Schexnayder and Senate President Page Cortez, along with other Republican legislative leaders, are backing a wide-ranging overhaul of Louisiana's tax structure. Gov. John Bel Edwards wants to give pay raises to public school teachers and college faculty in a budget that, for once, isn't riddled with holes.

Another round of debate about limiting the governor's emergency authority is planned, along with new discussions about prohibiting coronavirus vaccine mandates. Lawmakers also will try to hash out a final set of regulations governing sports betting, after most parishes authorized the wagering.

Female lawmakers want to enact new rules for responding to sexual misconduct allegations on college campuses after an independent report described widespread mishandling of such claims by Louisiana State University.

The 60-day session begins Monday at noon. It's supposed to focus mainly on financial issues, such as taxes and the budget. But lawmakers also could file up to five nonfinancial bills that have statewide impact and unlimited bills affecting specific municipalities.

Nearly 900 bills have been filed by lawmakers for debate.

Because of the pandemic, Edwards won't deliver the traditional speech about his agenda and state issues to the 144-member Legislature in the ornate House chamber.

Instead, the Democratic governor's planning a 6 p.m. speech at Southern University's stadium in Baton Rouge, where people can be distanced. He clearly doesn't expect most members of the majority-GOP Legislature to attend. His office said it's trying to keep the crowd to around 100 people.

State lawmakers face none of the budget woes that often are the focus of a legislative session. Rather, tax collections are starting to rebound from the pandemic, and Louisiana is receiving billions of dollars in federal coronavirus aid passed by congressional Democrats.

Edwards and lawmakers agree that they don't want to spend the more than $3 billion in direct aid the state will receive from the latest coronavirus relief package to pay for government operating expenses and ongoing programs. They're talking of using the cash for debt repayment, road and bridge improvements, broadband internet access expansion and other one-time items.

But some Republican lawmakers worry about the governor's proposal to use federal Medicaid money, temporarily boosted because of the virus outbreak, to piece together the budget for the financial year that begins July 1.

The Legislature's Republican leaders have prioritized a rewrite of Louisiana's tax system that they say is aimed at trying to lower income tax rates in exchange for cuts to tax break programs.

The debate is complex, and similar proposals have been tried and rejected in previous years. But Cortez and Schexnayder believe their focus on the issue can build consensus for bills that will require two-thirds votes to pass.

Edwards said he's open to efforts to simplify Louisiana's tax structure — but only if they remain “revenue neutral,” so the treasury doesn't lose money used to pay for state services and face new budget gaps.

Of particular interest to business lobbying groups is Schexnayder's bill to central sales tax collections in the state and ditch the fragmented system where different parish officials handle collections. That faces pushback from some local elected officials.

Edwards’ agenda is limited, focused on spending plans, some repeat proposals with little chance of passage and the embrace of ideas developed by lawmakers in response to the LSU scandal.

The governor is pushing increased investments in public colleges and pay raises of $400 for K-12 public school teachers and $200 for school support staff such as cafeteria workers and bus drivers. He said if the state's income projections improve, he'd like to steer the money to boost the teacher pay raises higher and increase spending on early learning programs.

He's supporting an effort to make kindergarten mandatory for children in Louisiana. He's also jumped on board with legislation that grew out of hearings about LSU's mishandling of sexual misconduct allegations, to spell out the process for responding to claims and requiring schools to fire any employee who doesn't follow the rules.

Despite annual rejections, Edwards again will ask lawmakers to pass legislation aimed at lessening the private sector pay gap between men and women and to raise Louisiana’s minimum wage above the federal rate of $7.25 an hour. Those proposals face strong opposition from business organizations.