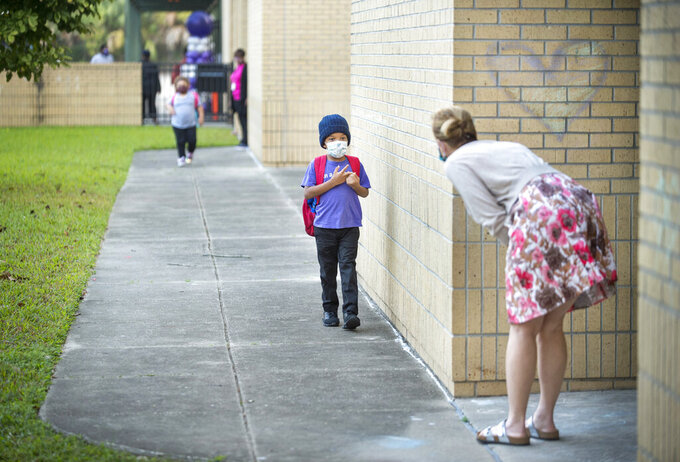 First grade teacher Bella Legault bends down to greet a nervous incoming student on the first day back at school for fifth-12th grade students at Foundation Preparatory School in New Orleans on Monday, Oct. 12, 2020. Because of coronavirus restrictions it was the first day of in-person learning for public school students in those grades in Orleans Parish. (Chris Granger/The Times-Picayune/The New Orleans Advocate via AP)

The K-12 school funding formula offered by the Board of Elementary and Secondary Education for the 2021-22 school year would boost spending by more than $80 million. It serves as the starting point for negotiations with the Louisiana Legislature in the upcoming session that begins April 12.

The proposal would steer $40 million more to school districts for their discretionary use in the budget year starting July 1. The other $40 million would cover pay raises of $400 for teachers and administrators and $200 for school support staff such as cafeteria workers and bus drivers. Another $2 million increase would pay for $2,000 stipends for teachers who provide teacher mentoring services.

“It remains important to continue moving the salaries of our dedicated Louisiana teachers toward the regional average, and ensure increased funding support for our schools and school systems as they continue to meet the challenge of educating students amid the COVID-19 pandemic,” education board President Sandy Holloway said in a statement.

In his budget proposal to lawmakers, Edwards recommended the $40 million for pay raises but not the other increases.

Neither proposal from the board or the Democratic governor was warmly received by teacher organizations, which sought significantly larger pay raises because Louisiana remains well behind the Southern average for its education salaries.

The Edwards administration has said that, while it wants to do more, Louisiana continues to grapple with the economic effects of the coronavirus outbreak and state tax collections have not fully rebounded from the pandemic's damage.

Plus, schools are receiving hefty sums of federal coronavirus aid outside of the state's financing formula. They received $287 million from Congress in spring 2020 and more than $1 billion from a congressional aid package approved in December, much of it still unspent.

Meanwhile, Louisiana's schools could be in line for billions more in additional federal assistance under legislation that received final passage Wednesday in Congress.

The education board approved the $80 million increase to the financing formula without objection.

Lawmakers can reject or approve the formula submitted by the Board of Elementary and Secondary Education, but they cannot change it. If the education board and lawmakers don’t agree on a new financing formula, the state continues to use the formula already on the books.