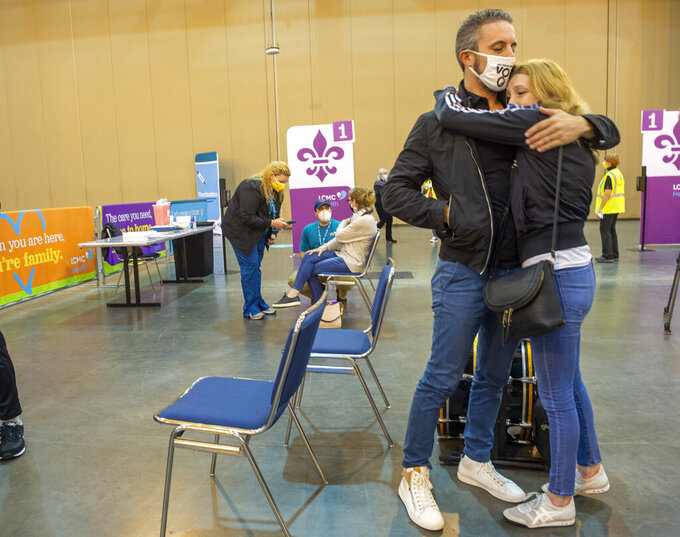 Drummer Kyle Sharamitaro hugs his wife, Katherine, moments after they both received the Johnson & Johnson COVID-19 vaccine on Thursday, March 4, 2021 at New Orleans Ernest N. Morial Convention Center in New Orleans. After getting his shot, Kyle joined the Soul Brass Band who were playing near the entrance (Chris Granger /The Advocate via AP)

The Democratic governor's decision adds anyone age 16 to 54 if they have hypertension asthma, cancer, diabetes, sickle cell disease, chronic kidney or liver disease, chronic pulmonary disease, Down syndrome, heart conditions, weakened immune system or several other preexisting conditions. Smokers and people who are overweight also are eligible for the immunization. In addition, people who work at homeless shelters, jails and group homes now have access.

Those who are 16 or 17 will only have access to the Pfizer vaccine because it's currently the lone vaccine available in the United States authorized for people that age.

Eligibility expansion comes as states are receiving larger shipments of the two-dose Pfizer and Moderna vaccines and a third, single-dose shot from Johnson & Johnson has been added into the mix. Meanwhile, three months have passed since vaccinations began, so Louisiana has steadily been immunizing more and more people.

“We came to this decision after hearing from our providers over the weekend that there's a little slack in the appointments and that they were able to accommodate — and ready to accommodate — more people,” Edwards said. “We also have had a very stable supply” of doses.

To get the shots in Louisiana, most people must schedule their own appointments through hospitals, clinics, pharmacies and community vaccine sites.

People eligible because of their medical conditions will need to fill out a form attesting that they meet the criteria that place them at a higher risk to severe impacts from COVID-19. But it's largely an honor system, since vaccine providers won't necessarily have a way to doublecheck the information for someone to get a shot.

“It is important that people be honest” and not jump the line if they don't meet the criteria, Edwards said, urging people to “be good neighbors.”

The hopeful news about broadened vaccine access fell on the same day Louisiana marked a more somber benchmark. Exactly a year prior, the state received confirmation of its first COVID-19 case in the New Orleans area.

Since then, 9,044 deaths from COVID-19 have been confirmed across the state, and hundreds of additional deaths are suspected. Nearly 373,000 people in Louisiana have been confirmed to have contracted the virus since the first case, according to the health department.

“This has obviously been a year of great loss and heartbreak, but we have come a long way," Edwards said.

He noted the number of Louisiana residents who have completed the coronavirus vaccine regimen exceeds the number of people confirmed to have been infected by COVID-19 over the last year.

Under the new eligibility rules issued Tuesday by Edwards, much of the adult population of Louisiana’s 4.6 million residents will have access to the vaccine. More than one-third of the state's residents are obese and even more are overweight, according to health data.

Those eligible outside of preexisting conditions include anyone age 65 and older; K-12 teachers and school support staff; people who work at daycare centers; pregnant women; health care employees; first responders; people who live and work at nursing homes and other long-term care facilities; state and local officials handling COVID-19 response; and elections workers, among others.

Demand continues to outstrip the available supply of vaccine doses, in Louisiana and across the nation. But with more vaccine available, Louisiana has started to hold multiple large vaccination events at churches, convention and civic centers, sports stadiums and other community sites.