Love returns from pandemic and a house that burned to ground 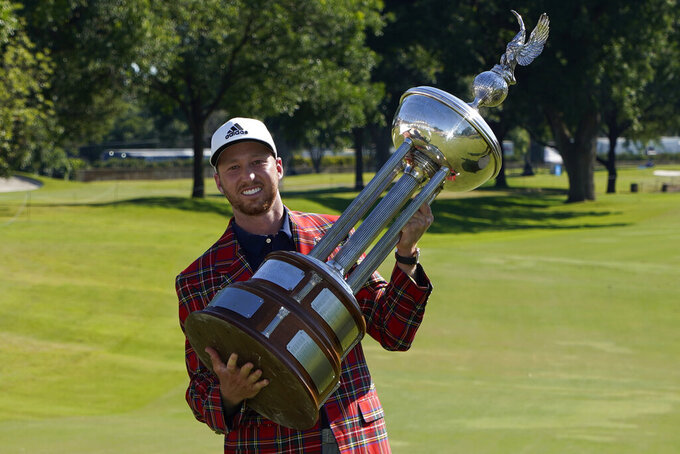 Daniel Berger poses with the championship trophy after winning the Charles Schwab Challenge golf tournament after a playoff round at the Colonial Country Club in Fort Worth, Texas, Sunday, June 14, 2020. (AP Photo/David J. Phillip)

HILTON HEAD ISLAND, S.C. (AP) — Davis Love III faced a different kind of adjustment when he returned to the PGA Tour this week at Hilton Head.

Two weeks after golf was shut down because of the new coronavirus, his home at Sea Island burned to the ground. It was a total loss, flames engulfing the entire structure even with fire officials quickly on the scene.

Love said it was emotional when he and his wife, Robin, packed for the RBC Heritage.

“We didn't have anything to pack like we usually would do,” Love said. “I'm searching for head covers, and my son gave me a ball-mark fixer on Sunday evening. I was like, ‘I just don’t have enough equipment to go play a PGA Tour event. So it's been ups and downs like that."

Love, a five-time winner at Harbour Town, played a practice round Wednesday with U.S. Amateur champion Andy Ogletree and another amateur in the field, Spencer Ralston.

Far more difficult was seeing familiar faces, many for the first time since the fire.

He leaned on another emotional moment in his career, returning to the tour in late 1988 after his father died in a plane crash. Love says when he showed up at the Chrysler Team Championship in South Florida, Andy Bean pulled him aside and suggested finding the right words for everyone who would be expressing their condolences.

“So I'm kind of going to go through that again,” he said. “Yesterday I got kind of worn out because I was talking so much to the people who wanted to talk to me.”

It was a good kind of tired. Love said he was happy to see so many friends after being away for three months, even though he has spoken to many over the phone.

“It's going to be a process, but we're moving through it,” Love said. “Again, we're blessed. We just lost some things. Nobody got hurt, and our family is still healthy and safe.”

He said he has bought another house in St. Simons Island, Georgia. When one of the rules official asked if he was settled in, Love said he replied, “No, I'm settling.”

“It will be a long time until things get settled for us,” he said. “But we're moving forward. We've got great support at home. It's just nice to be back out among friends.”

The PGA Tour resumed last week and so did the world ranking. And with so many players eager to get back to work, the field at Colonial was its strongest since the ranking began in 1986. Daniel Berger won and went from No. 107 to No. 31.

Along the way, he passed 18 players on the European Tour who couldn't do anything about it. The European Tour is not scheduled to resume for another month in Austria, and its first eight events will feature small purses and weak fields.

Two other Europeans that Berger passed — Henrik Stenson and Lee Westwood — chose not to come over from Sweden and England, respectively. They would have faced a 14-day quarantine upon arrival.

The disparity in ranking points for the PGA Tour while the other five major tours remain idle has been a delicate debate. For the top players — Tommy Fleetwood and Adam Scott are among those who are not coming over just yet — Rory McIlroy says it's in their hands.

“If I were in their shoes and I was asked to come over to the states and shelter in place or quarantine for two weeks before these tournaments, I would have done that,” McIlroy said. “If you really care about your career and care about moving forward, you should be here.”

McIlroy said he understands there are other variables — Fleetwood and Scott have small children and could be forced to be away for long stretches — but he added, “We all have the means to rent a very nice house in a gated community in Florida.”

“I honestly don't understand the guys complaining because there is a solution to it,” he said. “You can come over here and do what needs to be done.”

He did not address the European Tour members who have no place to play. Berger became eligible for the World Golf Championship in Memphis, Tennessee, where he has won twice. Shaun Norris of South Africa and Tom Lewis of England, each had slight drops and are out of the top 60.

The PGA Tour made it through the start of another week with a perfect mark in the COVID-19 tests.

There were 487 tests administered at Colonial, 98 tests for those on the charter to Hilton Head, and 369 tests given to those upon arrival at Hilton Head. All 954 tests were negative.

Next week, the number of tests will be increasing.

The Travelers Championship in Cromwell, Connecticut, is testing everyone on site. That includes volunteers, media and swing coaches, among others.

“Each tournament is held in a different market with a unique set of circumstances related to COVID-19, so we appreciate your cooperation and understanding,” the tournament said in the credential application form. “The health and safety of everyone who will be at TPC River Highlands during tournament week is the highest priority and testing is an important piece of our plan.”

Wesley Bryan, who won the RBC Heritage in 2017 and rose to No. 37 in the world, returns having not played on the PGA Tour since 80 miles down the coast at Sea Island to close out the 2018 season.

He had shoulder surgery and missed all of 2019.

Bryan returned to competition with a pair of Korn Ferry Tour starts in Panama and Mexico, and then the pandemic shut down golf and he had to wait even longer.

“I would say I've got maybe 5% left to go on the shoulder, just as far as range of motion and flexibility and all that stuff,” Bryan said. “But the strength is there. It feels good. I wouldn’t say great, but it should be good enough to complete four rounds. So that’s kind of the main goal.”