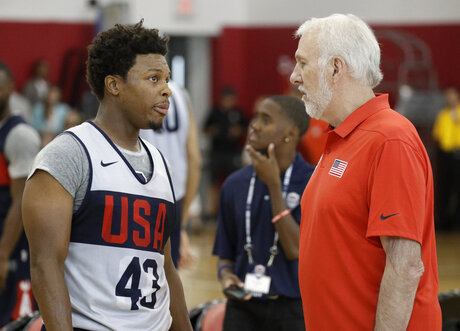 By: W.G. RAMIREZ (AP)
LAS VEGASCopyright 2020 The Associated Press. All rights reserved. This material may not be published, broadcast, rewritten or redistributed.
36.175-115.137

That didn't mean he was going to give them answers.

It was a USA Basketball minicamp in Las Vegas, and that's all that Lowry — the Toronto Raptors point guard who watched his longtime backcourt partner get traded to the San Antonio Spurs last week — wanted to talk about. So, when he was asked about DeRozan on Friday, no matter how reporters tried to pose questions, Lowry tailored his answers the exact same way.

"Summer has been great in general for everyone. Just to have the opportunity to relax and work on your game and prepare for the upcoming season."

DeRozan and Lowry are very close friends on the court and off, and neither was happy to see the trade. DeRozan was shipped to the San Antonio Spurs on July 18, along with center Jakob Poeltl and a protected 2019 first round pick, in exchange for Kawhi Leonard and wing Danny Green.

Lowry is coming off his lowest scoring output in five seasons, after averaging 16.2 points and 6.9 assists per game last year, considerably lower than the career-high 22.4 he averaged the previous season.

But, as the oldest player attending the two-day mini-camp, the 32-year-old said he wasn't as concernced about working on his game or anything particular as much as he was providing leadership at USA Basketball's first minicamp of this Olympic cycle.

"Just build chemistry and be a leader, be a voice," Lowry said. "We all know each other, we all have massive respect for each other so just coming to hang out and kick it is fun."

Lowry, who won a gold medal with the national team at the 2016 Rio Olympics, said one of the biggest benefits for him has been absorbing as much information from former USA Basketball coach Mike Krzyzewski, and new coach Gregg Popovich, also DeRozan's new head coach.

"They're two of the greatest coaches to ever coach the game of basketball," Lowry said. "Coach K has been amazing, having the opportunity to spend a lot of time with him three summers ago was awesome, and even these last three days with Pop has been fun."

And while Lowry refused to discuss his close friend's departure or anything pertaining to the Raptors, DeRozan said he was confident his former teammate would be just fine without him thanks to a basketball IQ he respects.

DeRozan said both players understand the league is about business.

"Kyle is Kyle, at the end of the day this is our profession," DeRozan said. "We understand what comes with the job. It's gonna be simple, we all gotta job and got responsibilities to take care of with our home team. What happened, happened. He gotta do what he gotta do for his team and I go to do what I got to do for mine."