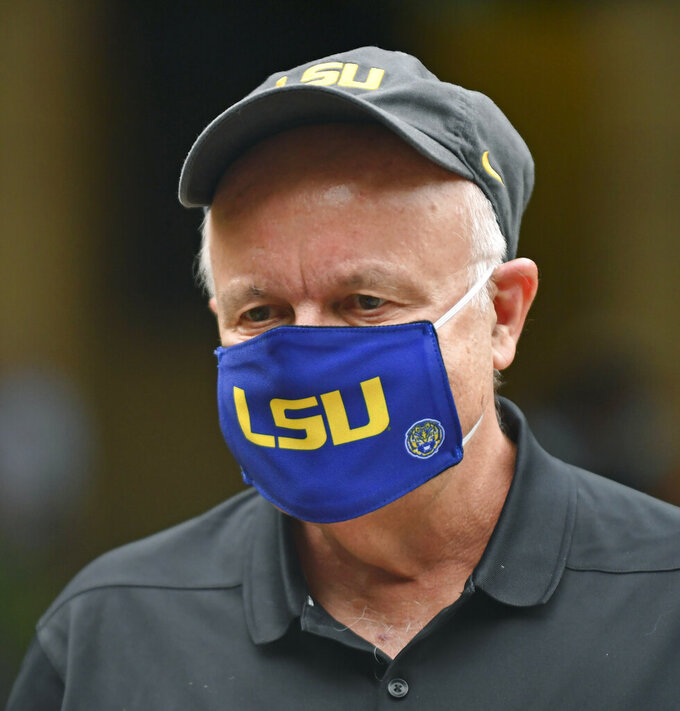 Louisiana State University interim president Tom Galligan speaks during a planned peaceful blackout Wednesday demonstration to call for unity and promote change on campus, Wednesday, June 3, 2020, in the quad at LSU in Baton Rouge, La. Galligan, criticized for the school's response to a widespread sexual misconduct scandal, announced Tuesday, April 20, 2021, that he's withdrawing his name from the search for a permanent system leader. (Hilary Scheinuk/The Advocate via AP)

BATON ROUGE, La. (AP) — The interim president of Louisiana State University, criticized for the school's response to a widespread sexual misconduct scandal, announced Tuesday that he's withdrawing his name from the search for a permanent system leader.

Tom Galligan said he intends to return to the LSU Law Center once the university system completes its search for a new president. He cited the death of his daughter from lung cancer shortly before the university governing board asked him to be interim president and said he wants to be able to spend more time with his family and return to teaching.

“I have made the difficult decision to withdraw from the presidential search, though I will remain onboard as Interim President while the university completes its selection process,” Galligan wrote in a letter released by the university.

The announcement comes as LSU is reaching the final phases of its work to develop a list of contenders for the job overseeing the state's flagship university system, which includes two medical schools, a law school, an agricultural center and campuses in Baton Rouge, Alexandria, Eunice and Shreveport.

In his letter, Galligan did not mention the sexual misconduct scandal embroiling the Baton Rouge campus. The controversy involves allegations before Galligan was in charge of the university system, but the interim leader has received complaints from female lawmakers, students and others about his disciplinary decisions.

The scathing report detailed years of widespread mishandling of claims of sexual harassment, domestic violence and rape. Galligan has faced blistering criticism for LSU's decision to briefly suspend two employees rather than fire anyone implicated in years of botched responses to misconduct allegations.

Galligan has defended the decisions as fair, saying university policies for handling complaints were unclear at the time of the incidents in the report. He has repeatedly apologized to the victims of misconduct and pledged to follow the long list of Husch Blackwell recommendations for improvement. He's worked to create a new office to handle Title IX complaints and said the university will boost spending on such investigations and response work going forward.

Galligan, then-dean of the LSU law school and a law professor, was recruited by the university Board of Supervisors to take the helm of the multi-campus system after former System President F. King Alexander announced in December 2019 that he was leaving the job.

Galligan said he took the job “eagerly, but I had no idea how much change lay ahead.”

He started as interim president in January 2020 and announced later in the year that he was interested in seeking the job permanently. He's led the university system through the coronavirus pandemic and now the sexual misconduct scandal.

Former football coach Les Miles was pushed out of his coaching job at Kansas after the Husch Blackwell report detailed allegations of inappropriate behavior with students during his tenure at LSU. An associate athletic director at LSU has filed a $50 million federal racketeering lawsuit against the university, accusing officials of retaliating against her for reporting racist remarks and inappropriate sexual behavior by Miles. The former coach denies all the allegations.

Alexander resigned from his job leading Oregon State because of his role in the mishandling of sexual misconduct cases at LSU.