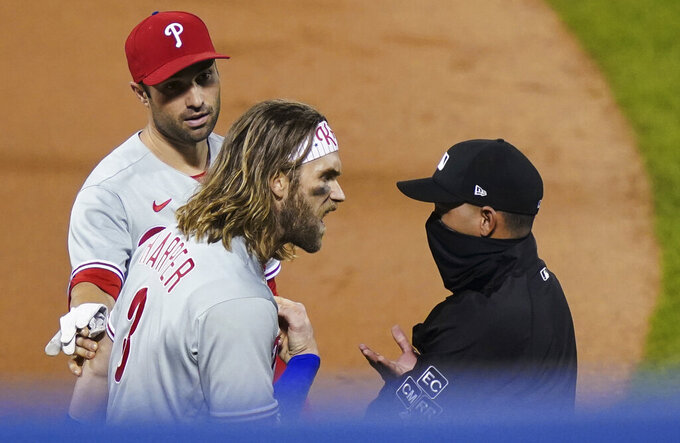 NEW YORK (AP) — Seth Lugo got the Mets' rotation its first win in more than three weeks, Phillies star Bryce Harper screamed in an umpire's face after being ejected for arguing over a foul ball, and New York beat Philadelphia 5-1 Saturday night.

In his third start since moving out of the bullpen, Lugo (2-2) pitched five innings of one-run ball and tied a career high with eight strikeouts. He ended a stretch of 19 games for the Mets without a starter earning a victory, which matched a franchise record set in 1980.

Andrés Giménez had two RBIs in his bid to steal the starting shortstop job from Amed Rosario. Jeff McNeil hit two doubles, and Michael Conforto added two hits and an RBI as New York snapped a six-game skid against Philadelphia.

Rhys Hoskins homered in the first inning, but the Phillies' five-game winning streak ended as they lost for only the second time in 12 games. Rookie right-hander Spencer Howard (1-2) allowed three runs in four innings, and reliever Ranger Suarez permitted another two runs.

Harper was tossed in the fifth by first base umpire Roberto Ortiz. The left-handed hitter ripped a first-pitch curveball from Lugo down the first base line, and Ortiz ruled the ball was foul. Harper put his hands on his head as he glared down the line before resuming the at-bat.

After grounding to third for the final out of the inning, Harper began arguing with Ortiz. Phillies second baseman Neil Walker tried to restrain Harper, and Ortiz warned Philadelphia’s $330 million slugger multiple times to stop before signaling his ejection.

Harper then got in Ortiz’s face and began yelling at the 35-year-old umpire — an apparent violation of Major League Baseball’s safety protocols during this pandemic-shortened season.

The strong-armed Harper looked on as Walker caught the ball on his heels and delivered an off-balance, wild throw home that let Frazier score easily. Walker shook his head at Harper after the play and appeared to explain to teammates in the dugout during the next inning that he was waiting for Harper to call him off the ball.

Jeurys Familia, Justin Wilson, Miguel Castro and Edwin Díaz pitched a scoreless inning each to close up shop for New York. Díaz struck out three and worked around two walks in a non-save situation.

Lugo set a season high with 81 pitches. He’s allowed two runs in 11 2/3 innings with 20 strikeouts and four walks since joining the rotation. It was his first win as a starter since June 2018.

Mets manager Luis Rojas wouldn't commit to Rosario as the team's everyday shortstop moving forward after starting Giménez, a 22-year-old rookie, at the position on consecutive days. Rojas said he wanted to ride Giménez's hot hand and keep the left-handed hitter in the lineup against the right-handed Howard.

The 24-year-old Rosario blossomed on both sides of the ball in 2019 but has struggled during this pandemic-shortened season. He entered Saturday batting .229 with three home runs.

Giménez had two hits, a walk and a stolen base. He is batting .288 with a team-leading seven steals.

Phillies: INF/OF Scott Kingery (back) took swings off a tee Friday for the first time since going on the 10-day injured list Monday and is eyeing a Wednesday return. ... CF Roman Quinn replaced Harper, crashed into the outfield wall chasing a fly ball in the sixth and was removed for a pinch-hitter in the seventh. The team did not provide an immediate update on his status.

Mets: 1B Pete Alonso was given a day off to rest but was available to pinch hit. ... C Tomás Nido (COVID-19 injured list) was cleared to resume baseball activities and returned to the club's 60-man player pool. ... RHP Hunter Strickland cleared waivers and accepted an assignment to the club's alternate site. ... RHP Pedro Payano was released.

Phillies RHP Aaron Nola (4-2, 2.46 ERA) opposes two-time reigning NL Cy Young Award winner Jacob deGrom (2-1, 1.76) in a rare showdown between the NL East aces. The pair have only shared the mound once, a 2018 game in which deGrom was pulled after one inning in a return from injury.