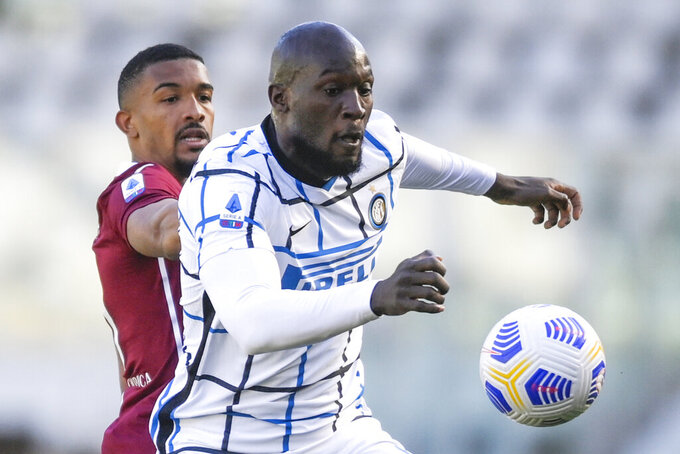 Inter's Romelu Lukaku, right, and Torino's Bremer Gleison vie for the ball during the Italian Serie A soccer match between Torino and Inter Milan at the Olimpico Grande Torino stadium in Turin, Italy, Sunday, March 14, 2021. (Fabio Ferrari/LaPresse via AP)

BRUSSELS (AP) — Inter Milan striker Romelu Lukaku has been given permission to leave Italy and join his Belgium teammates after returning a negative test for COVID-19 ahead of upcoming World Cup qualifying matches.

Lukaku was included in coach Roberto Martinez's squad last week but his availability had been unclear because of virus outbreak at the Serie A club.

However, the Belgian team said the former Manchester United striker was able to join the rest of the group on Monday afternoon.

“He is now under the Belgian COVID-19 regulations, which means that like every professional sportsman he is allowed to train and play matches," said Stefan Van Loock, the team's press officer.

Belgium, which tops the FIFA rankings, starts its 2022 World Cup qualifying campaign on Wednesday against Wales before taking on the Czech Republic and Belarus. The Belgians will again be without Real Madrid playmaker Eden Hazard, who is sidelined by a muscle injury in his right leg.