Lyon's youth takes on experience of Bayern in CL semifinal 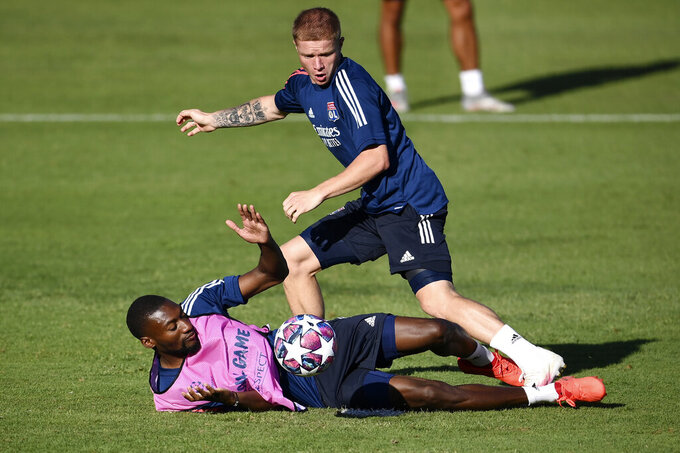 Lyon's Melvin Bard vies for the ball with teammate Karl Toko Ekambi, on the ground, during a training session at the Restelo stadium in Lisbon, Tuesday Aug. 18, 2020. Lyon will play Bayern in a Champions League semifinals soccer match on Wednesday. (Franck Fife/Pool via AP) 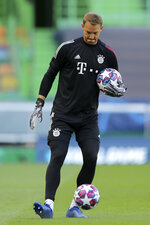 Even if the French club's semifinal opponent on Wednesday is a Bayern Munich side that just humiliated Barcelona 8-2.

“Their performance against Barça proved that Bayern remain an excellent team and one that mustn’t be taken lightly,” Lyon forward Maxwel Cornet said. “We’ve knocked out some really big teams ... that shows we’re every bit as good as those teams."

It was Cornet's goal — his first in seven Champions League appearances this season — that set Lyon on the way to a 3-1 victory over a City side that is the most-expensively assembled in football history.

Financially there is a lot at stake for Lyon. Beyond the huge prestige of winning the European Cup for the first time, Lyon has to win the final just to qualify for next season's competition after only finishing seventh in a French league season curtailed by the pandemic.

But Lyon did take Paris Saint-Germain to penalties in the French League Cup final last month, only to lose the shootout.

“To be part of a squad that is quietly and humbly writing history is really, really nice,” the 23-year-old Cornet said. “We have a young squad. I think you can feel that on the pitch.”

Just look at the midfield.

There's academy graduate Houssem Aouar and defensive midfielder Bruno Guimaraes, who are both 22. And 20-year-old Maxence Caqueret also rose through the ranks at Lyon.

“Lyon really are a very good team tactically," Bayern goalkeeper Manuel Neuer said. "They can play on the break, and they have killers in their ranks who punished City mercilessly.

“We have to make sure we’re wide awake. Any mistake can be quickly punished and you’re quickly out.”

Bayern was Lyon's opponent when the Ligue 1 side last reached a Champions League semifinal in 2010, with the German team winning 4-0 over two legs. This time, due to the pandemic constrained format, the semifinal is a single game without fans in Lisbon.

“Even though from a German point of view they are the least known entity amongst the semifinalists," Bayern midfielder Corentin Tolisso said, "I also know that they always show up in big games.”

Tolisso should know a lot about them. He was part of the Lyon side that made it to the last four of the second-tier Europa League in 2017, losing to Ajax.

“It’s incredible," he said. “Since I left Lyon, I’ve been wondering when I’ll get the chance to play against them and meet them again. I never thought it would happen in the Champions League semifinals.”

But it is Bayern which is the overwhelming favorite after the demolition of Barcelona. Lyon goalkeeper Anthony Lopez will be hoping he is not picking the ball out of his net eight times.

“I’m not worried," Lopez said. “Of course the demands are high. I will be busy, but that’s OK.”

While the Bavarian powerhouse it the undisputed force of German football — winning the last eight Bundesliga titles — it has failed to carry that form over to Europe. It is seven years since Bayern won the last of its five European titles.

“We talk every day about the chance that we have here in Lisbon,” Bayern forward Serge Gnabry said.

Like Lyon with the arrival of Rudi Garcia, Bayern is also reaping the rewards of a mid-season managerial change. Hansi Flick replaced Niko Kovac in November, leading a revival powered by Robert Lewandowski's goals. The striker's tally for the season moved to 54 in the rout of Barca.

“It looks like we are the favorites now,” Gnabry said. “So we have to be careful not to let them beat us. But we know they are very strong on the counterattack and are good defensively. So we have to be on the front foot.”