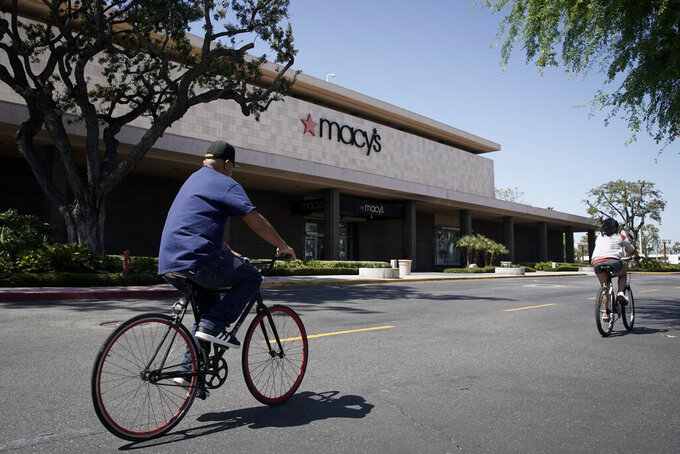 FILE - In this March 30, 2020 file photo, bicyclists pass in front of a closed Macy's department store in Santa Ana, Calif. Macy’s warned Thursday, May 21 that it could lose more than a $1 billion during its first quarter after the coronavirus pandemic paralyzed retail operations worldwide. (AP Photo/Chris Carlson)

NEW YORK (AP) — Macy’s warned Thursday that it could lose more than a $1 billion and see sales fall at least 45% during its first fiscal quarter after the coronavirus pandemic paralyzed retail operations nationwide.

The dire preliminary report from the iconic department store chain offers the latest evidence that the pandemic is widening the divide between big box stores like Walmart and Target and mall-based clothing chains.

L Brands, which operates Victoria's Secret and Bath & Body Works, reported a wider-than-expected loss on a deep sales drop, particularly with the lingerie brand. But Best Buy, the nation's largest consumer electronics chain, said it retained 81% of its sales during the pandemic quarter — even if with its stores closed to shoppers.

TJX Cos., which operates T.J. Maxx and HomeGoods and Marshals and is usually one of retail darlings, took a beating during the quarter because it was forced to temporarily close its stores and its fledgling online business. The chain said Thursday it swung to a loss and sales were down a little more than 50%. But the company, known for its deep discounts of major brands, sees “strong initial" sales from the stores that have reopened, and analysts believe the chain will bounce back.

“The divide was already widening between the big box operators and mall based retailers," said Ken Perkins, president of Retail Metrics, a retail research firm. “The pandemic is now pushing it to the brink.”

Department stores, already weakened before the pandemic, are seeing an uncertain future. Neiman Marcus, Stage Stores and J.C. Penney filed for bankruptcy protection this month and more are expected to go down that road in coming months.

Kohl’s said this week that sales had slumped more than 40% and it lost money in its first quarter. But its CEO Michelle Gass believes that the chain will fare better than its peers since most of its stores are at strip centers.

Before the pandemic, big box stores were succeeding keeping up with Amazon as they ramped up online services and beefed up their store experiences. Clothing chains, meanwhile, were struggling to follow shoppers online while facing increasing competition from off-price stores like T.J. Maxx.

The pandemic gave many of these big box stores a natural advantage because they sold essential items like toilet paper and groceries and therefore were allowed to remain open. But many of them also had the infrastructure in place — a network of stores and a bevy of online delivery options — to meet surging online shopping that doubled and tripled in a matter of days.

Perkins said that so far non-mall based stores are on track to post first-quarter earnings drop of 20.5%. That compares to mall-based chains, which are seeing earnings down more than three-fold, according to his roster of 103 retailers.

Walmart and Target reported surging online sales and strong store sales while using their stores as distribution hubs. To deal with the backlog at its online operations, Walmart used about 2,500 stores to ship online orders.

Unlike its big box peers, Best Buy temporarily closed its 1,000 stores and successfully converted its business to curbside pickup as it met soaring demand from people looking to buy home office equipment. Earlier in the month it started to reopen its stores using a new consultation service where customers can come into the store by appointment. That number is now at 700 stores, or approximately 70% using that service.

“In the middle of (the first quarter) we shifted all our stores to a curbside-only operating model and were able to retain approximately 81% of last year’s sales during the last six weeks of the quarter, even though not a single customer set foot in our stores,” said Chief Executive Corie Barry in a statement.

Analysts are closely watching shoppers' behavior and their willingness to go back to the stores.

Macy's CEO Jeff Gennette said that sales at the stores that have reopened have been “moderately higher than anticipated.” Earlier this month, Gennette said that he expected the reopened stores would generate less than 20% of their typical activity in the beginning stages.

Macy’s has acknowledged that it will emerge from the pandemic a smaller company. It confirmed Thursday that it is searching for additional financing to allow for more financial flexibility.

Like many of its peers, Macy’s closed all stores in mid-March and furloughed a majority of its workers. It began to reopen its stores early this month and about 190 Macy’s and Bloomingdale’s locations were operating in one form or another as of this week. It expects another 80 Macy’s stores to open for Memorial Day weekend and most of its stores, including its flagship stores in Manhattan, to open in mid-June.

Sales, the New York department store said in a preliminary report could plummet to around $3 billion, down 45% from the $5.5 billion in sales booked just a year ago. It said it would likely swing to a quarterly loss of between $905,000 and $1.1 billion.

Macy's had a profit of $203 million in last year's first quarter, which ended on May 2.

The company will release more details about its quarterly performance early next month.