Madrid on brink of Spanish title after win at Granada 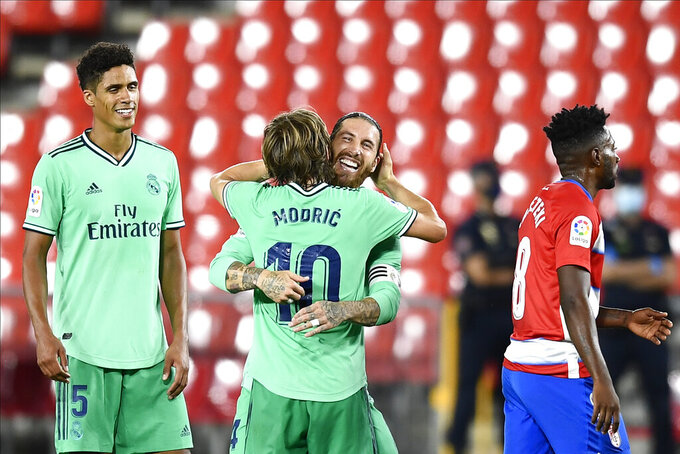 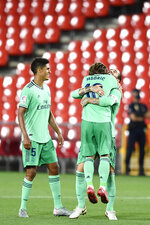 MADRID (AP) — After its ninth straight win following the pandemic break, Real Madrid is on the verge of reclaiming the Spanish league title.

Madrid defeated Granada 2-1 on Monday to move within two points of winning the trophy.

Madrid can clinch its first title since 2017 on Thursday with a win at Villarreal, or if Barcelona loses points when it hosts Osasuna. Two draws in the final two rounds will also be enough to secure Madrid a record 34th league trophy.

“We are a step closer but we can’t relax, we haven’t won anything yet,” Madrid captain Sergio Ramos said. “There are still points to be won. We depend on ourselves and we have a game at home coming up, hopefully we can win it and celebrate the league title."

Madrid was in control early in Granada and Mendy's first goal since joining the Spanish club this season came from a beautiful angled shot into the top corner after getting past a defender inside the area in the 10th minute.

Benzema added to the lead six minutes later by scoring his 19th league goal with a right-footed strike into the far corner.

Granada, which was 10th in the standings, got on the board with a goal by Darwin Machís in the 50th and pressured to the end.

The hosts came closest to the equalizer with about five minutes left, when Madrid goalkeeper Thibaut Courtois had to make a difficult save and Ramos cleared a shot at the goal line.

Madrid had not conceded a goal in its last five league matches.

Real Madrid, Barcelona and Atlético Madrid have the other berths in the Champions League.

Sevilla last featured in the Champions League in 2018 when it was eliminated by Bayern Munich in the quarterfinals. It played in the Europa League in 2018-19 and this season, where it will face Roma in the round of 16.

Villarreal needed a win to keep alive its hopes of making it to the Champions League. It has won six of its nine matches following the pandemic break, but the home setback against Sociedad ended its chances of qualifying. It remains in good position to grab a Europa League spot, though, as it kept fifth place.

Sociedad also stayed in contention for the Europa League with its third win since the break, moving to seventh place. Willian José scored in the 61st minute and Diego Llorente in the 75th, while the hosts pulled closer through Santi Cazorla in the 85th.

Getafe stayed in sixth place after drawing at relegation-threatened Alavés 0-0.

A late goal disallowed by video review kept Getafe from earning its second win since the league resumed after the pandemic stoppage.

Alavés has also won only once since the break and is winless in seven straight league matches. It is four points above the relegation zone.