Madrid without Bale and Hazard ahead of league opener 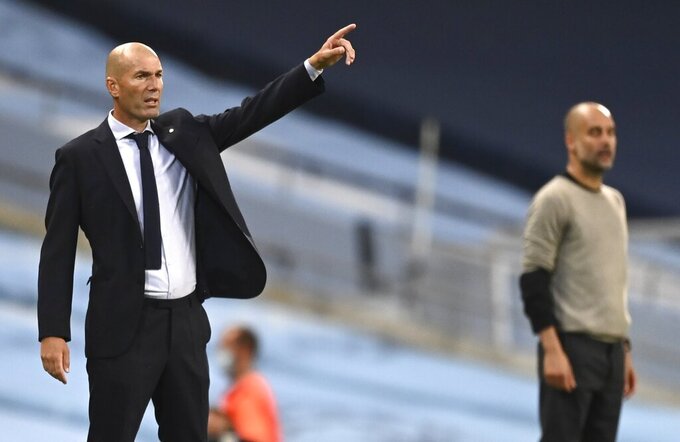 MADRID (AP) — Real Madrid is getting ready for the start of the Spanish league without Gareth Bale and Eden Hazard.

Neither player was summoned for Tuesday's training match against Getafe, the last for Madrid before its league opener on Sunday.

Hazard was out as he tries to regain his fitness, while Bale didn’t play as he awaits a possible transfer.

Madrid won the match but gave no information on scorers. Spanish media said the final score was 6-0 for Madrid, with Karim Benzema scoring four goals. The game was played at the Alfredo Di Stéfano Stadium in the club’s training center, where again Madrid will host its matches as the Santiago Bernabéu Stadium undergoes renovation work.

Spanish league games will continue to be played without fans because of the coronavirus pandemic.

Getafe would have been Madrid’s opponent in the opener last weekend, but the match was postponed because Madrid played in the latter stages of the Champions League. Madrid’s first league game will be on Sunday at Real Sociedad, which finish sixth last season. Real Sociedad opened with a 1-1 draw at Valladolid last Sunday.

Bale is not expected to stay with Madrid after not getting many playing minutes under coach Zinedine Zidane at the end of last season. The Wales forward asked not to play in the team’s final match of the season, against Manchester City in the round of 16 of the Champions League.

Madrid is reportedly negotiating a transfer for the 31-year-old forward who has been with the Spanish club since 2013. His contract ends in June 2022. Spanish media has reported that Bale is near a deal to move on loan to either Manchester United or Tottenham.

Hazard was left out to have more time to regain his fitness. He had been bothered by a lingering ankle injury and missed preparation time after being with Belgium's national team. The forward practiced separately from the squad on Tuesday. Bale also was at the club's headquarters despite not playing in the training match.

Playmaker Martin Odegaard, back with Madrid from a loan to Real Sociedad, also did not play in Tuesday’s game because he wasn’t fully fit. Other absent players who were not fit included Francisco “Isco” Alcarón, Sergio Reguilón and Luka Jovic.

There won’t be major changes to Zidane's squad from last season, with James Rodríguez the only top player to have departed after reaching a deal with English club Everton.

Madrid is coming off its first Spanish league title in three years. It will try to win two in a row for the first time since 2007-08.