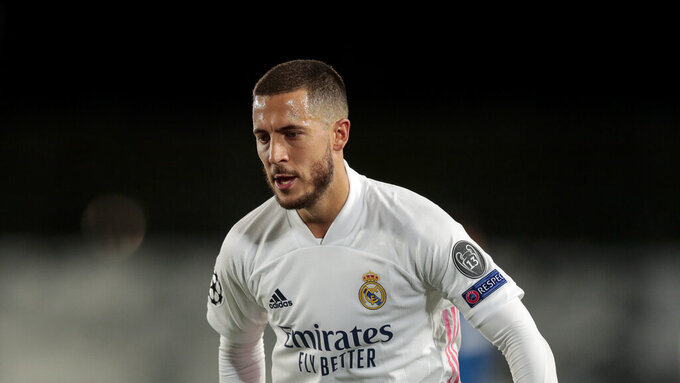 The Spanish club said all other first-team players, coaches and employees in close contact with the team were negative from testing on Friday.

“Casemiro and Hazard are upbeat and doing well,” coach Zinedine Zidane said. “They’re not happy about what’s happened, but in terms of how they’re doing mentally and physically, despite the tough nature of the situation, they’re fine."

Coronavirus protocols require the 29-year-old Hazard and 28-year-old Casemiro to isolate. They will miss Sunday’s Spanish league match at Valencia.

Hazard and Casemiro had been called up by Belgium and Brazil, respectively, for upcoming international games.

This is the latest health-related setback for Hazard, who had come back from injury and played the last three games for Madrid. He scored his first goal in a year for his club last weekend.

Madrid is in second place one point behind Liga leader Real Sociedad entering this weekend’s round of games.

While Zidane has several forwards to choose from, he has no natural substitute for holding midfielder Casemiro.

“Despite the absences we’ve got, we still have a good number of players to choose from and that’s the most important thing,” Zidane said.