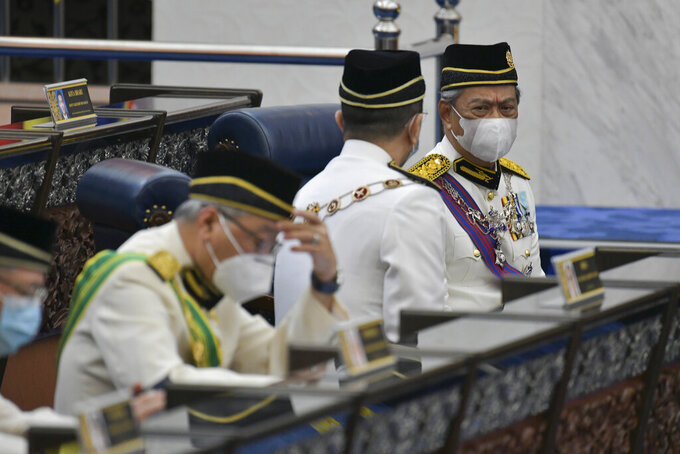 In this photo released by Malaysia's Department of Information, Malaysia's Prime Minister Muhyiddin Yassin, right, wearing a face mask along with his cabinet members attend the opening ceremony of the third term of the 14th parliamentary session at parliament house in Kuala Lumpur Monday, May 18, 2020. Malaysia's parliament held an unusual half-day sitting Monday, that was kept short due to the COVID-19 pandemic and saw Prime Minister Muhyiddin Yassin dodge a vote of no-confidence against him over two months since he came into power. (Nazri Rapai/Malaysia's Department of Information via AP)

KUALA LUMPUR, Malaysia (AP) — Malaysia's Parliament held an unusual half-day meeting Monday that was shortened due to the coronavirus and allowed Prime Minister Muhyiddin Yassin to avoid a no-confidence vote after more than two months in office.

More than 200 lawmakers, including former leader Mahathir Mohamad, wore masks and sat apart from each other in the hall as they listened to a speech by the king. The sitting was dismissed right after the speech, with all policy discussion and debates shelved until the next session in July.

The government said the shortened session was meant to prevent the spread of the virus as the country emerges from a lockdown, but opposition lawmakers accuse Muhyiddin of being scared to face the no-confidence vote against him that is being sought by Mahathir.

“We cannot accept the excuse that we can only meet for two hours because of the pandemic,” Mahathir told a news conference later.

The two-time prime minister said Parliament could have remained sitting since strict health measures were observed, including temperature screening and social distancing. Mahathir said debates were also crucial as government aid to help the poor cope with the pandemic hasn't reached target groups.

Malaysia, which has 6,894 cases of virus infection and 113 deaths from COVID-19, recently allowed most businesses to reopen but mass gatherings are still banned.

Mahathir quit as prime minister in late February to protest Muhyiddin’s move to pull their party out of the then-ruling alliance and work with the corrupt-tainted former Malay ruling party that they ousted in May 2018 polls. The move triggered the alliance's collapse.

Sultan Abdullah Sultan Ahmad Shah said he had appealed to Mahathir to stay but Mahathir refused. The king said he picked Muhyiddin as the new leader after finding Muhyiddin had majority support of lawmakers following a weeklong political crisis.

Mahathir, 94, has sought to return as premier, contending he has majority support. But his support couldn’t be tested after Muhyiddin prorogued parliament by two months.

The king called for national unity in his speech.

“Do not drag the country into another political mess at a time when the people are facing hardship and an uncertain future due to the COVID-19 pandemic," the king said, adding that focus should be given to the people's welfare.

Mahathir and leaders in the opposition bloc later issued a statement supporting the king's call to fight against corruption and abuse of power. They said prosecutors' recent decision to drop money laundering charges against Riza Aziz, “Wolf of Wall Street” producer and stepson of ex-Prime Minister Najib Razak, has tarnished Malaysia's image and gave the perception that it wasn't serious in fighting graft.

The pandemic has given Muhyiddin a window to consolidate his power. Parties in his government declared plans over the weekend to formalize their loose coalition, partly to thwart talks that their alliance is shaky. Some in the former Malay ruling party, where Najib and several leaders are on trial for corruption, have said their party was not treated fairly in terms of government positions.