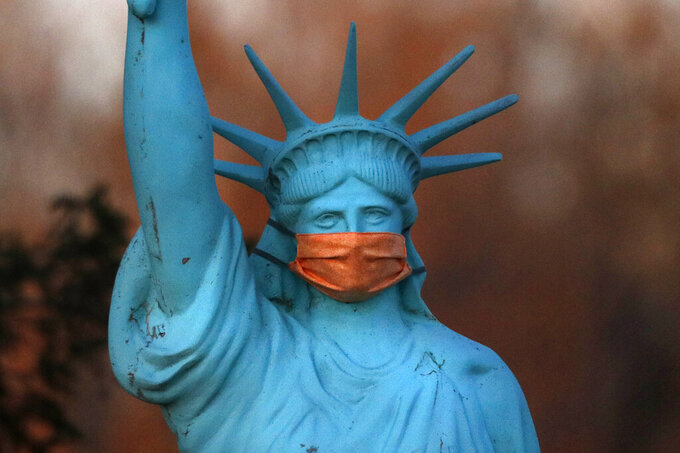 A replica of the Statue of Liberty wears a coronavirus mask outside a home on Deer Isle, Maine, Wednesday, May 6, 2020. (AP Photo/Robert F. Bukaty)

AUGUSTA, Maine (AP) — The state has partnered with a Maine-based company to buy enough of its coronavirus testing kits to more than triple the state’s testing capacity, meaning that anyone in Maine suspected of having the virus will be able to get a test, Gov. Janet Mills said Thursday.

The state is buying enough test kits from IDEXX Laboratories Inc. to run at least 5,000 tests per week for the foreseeable future, Mills said.

“This changes everything,” Mills said in a news release. “Acquiring this testing capacity is a major breakthrough for all the people of Maine.”

She didn’t specify how much the kits will cost the state.

The tests will add to the Maine Center for Disease Control and Prevention’s current capacity of 2,000 tests per week. These tests are in addition to those conducted for Maine residents by non-governmental labs in and outside of the state.

The tests will be run at Maine CDC’s Health and Environmental Testing Laboratory in Augusta. Additional staff will be hired to support the expansion.

Other developments in Maine:

A Portland meat processing plant where 51 workers tested positive for the coronavirus is set to reopen.

The Tyson Foods plant, which shut down Friday after an outbreak was discovered, is getting back to business Thursday after all workers and contractors were tested, a spokesman said.

The company relaxed its attendance policy to encourage the workforce, mostly made of up immigrants, to stay home if they are feeling sick. Tyson has paid workers while the plant was idle.

The 51 workers are roughly one-fifth of the 390 full-time workers. The Maine Center for Disease Control and Prevention continues to investigate the plant’s outbreak.

The coronavirus causes a disease called COVID-19 that creates mild or moderate symptoms for most people, but for some, especially older adults and people with existing health problems, it can cause more severe illness or death.

About 10,500 of those claims can be attributed to the implementation of the Pandemic Unemployment Assistance program included in the relief bills passed by Congress.

More than 82,000 public school students in Maine are eligible for free or reduced-price meals as part of a new federal program aimed at helping families cope with the pandemic.

Maine is among 20 states participating in the Pandemic Electronic Benefit Transfer program, which was signed into law on March 18. Many of the eligible students already receive aid from the Supplemental Nutrition Assistance Program, said Rep. Chellie Pingree, D-Maine.

“I’m grateful for this move, which is another critical component of our plan to keep Maine’s children healthy,” she said.