Maine gov: Store workers shouldn't have to be "COVID cops" 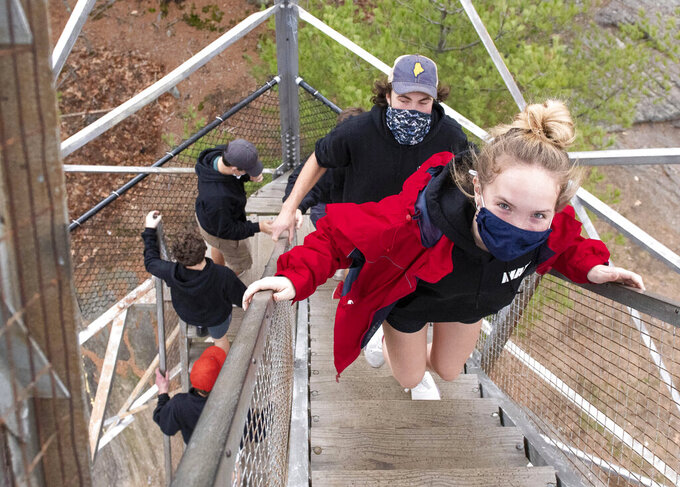 Lydia Roy climbs the publicly accessible fire tower at the summit of Mt. Pisgah in Winthrop, Maine with the Monmouth cross country team on Wednesday, Nov. 11, 2020. The group ran to the top of the mountain together as a sign of unity on the date the cancelled state championships that had been scheduled to start. (Andree Kehn/Sun Journal via AP)

PORTLAND, Maine (AP) — Workers at local stores who encounter people who won't comply with Maine mask requirements shouldn't have to enforce the rules themselves, the state's governor said.

Maine Gov. Janet Mills, a Democrat, issued an executive order last week that requires people in the state to wear a mask in all public places, regardless of their ability to socially distance. She said during an appearance on Maine Public that too much of the burden of enforcement often lands on store employees.

Mills' statement came at a time of alarming virus numbers: Maine recorded more than 190 new coronavirus cases and one new death on Thursday as officials warily monitored growing weekly rates. The seven-day rolling average for daily cases rose to 165, which is five times the average from a month ago, according to the Maine Center for Disease Control.

There are active cases in all 16 counties. Five of the counties are now classified as having high or substantial community transmission: Franklin, Knox, Somerset, Waldo and Washington counties, officials said.

The total number of positive test reports since the pandemic began grew to nearly 8,400.

Between March 15 and Nov. 7, the Maine Department of Labor has paid over $1.6 billion in unemployment benefits.

Mills on Thursday also joined governors of six other states across the region in suspending interstate youth hockey games amid a surge in coronavirus cases over the past month.

A laboratory group has launched a new coronavirus testing initiative that it said will make testing more accessible in Maine and New Hampshire.

NorDx Laboratories said the new testing option will allow patients across Maine and in Carroll County, New Hampshire, to get a test without a doctor's referral. Results from the tests can be made available in 72 hours or less, and patients can be notified by email, the lab group said.

NorDx laboratory director Robert Carlson said access to the results “can play an important role in helping to slow the spread of the disease, providing patients with one more option to consider if they have symptoms or think they've been exposed to the coronavirus.”

NorDx is part of MaineHealth, which is the largest healthcare system in the state.

The Maine Department of Health and Human Services also said that the first 10 of up to 65 Walgreens testing sites are set to open on Friday. All of the sites are expected to be open by Nov. 23.