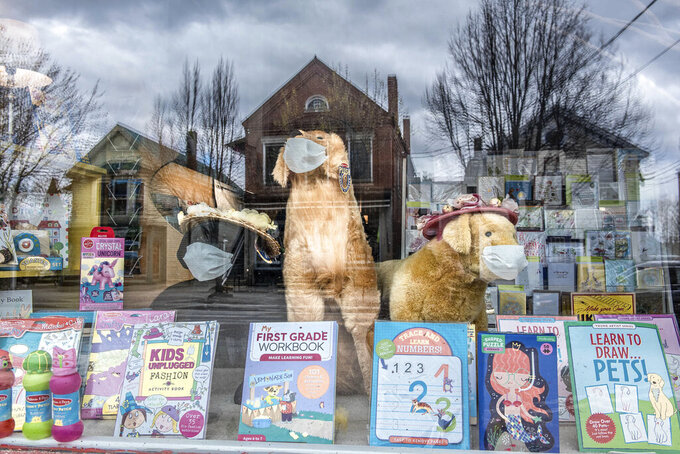 Three plush dogs wearing face masks sit in the window display of The Tribune bookstore in Norway, Me., on Sunday, May 10, 2020, reflecting the quiet streets (Andree Kehn/Sun Journal via AP)

The Maine Department of Health and Humane Services said it's launching a digital, social media and television campaign to make sure residents use CoverMe.gov, which helps people find insurance. DHHS Commissioner Jeanne Lambrew said the drive is important because people have lost jobs or experienced changing economic circumstances during the pandemic.

The state will also pay for coronavirus testing and diagnostics through MaineCare for residents who don't have the ability to pay, Lambrew said.

“Everyone will have some sort of coverage,” she said.

The Maine Air National Guard honored health workers and other essential employees with a flyover Tuesday.

A KC-135 from the 101st Air Refueling Wing flew over communities in western, central and coastal Maine, but bad weather prevented a flight over northern communities. The northern part of the flight will be rescheduled.

“The entire Maine National Guard is honored to extend our heartfelt gratitude to all the healthcare workers and first responders who are working on the front lines to combat COVID-19,” Maj. Gen. Douglas Farnham, Maine’s adjutant general, said in a written statement.

This event is part of Operation American Resolve, a nationwide salute to front-line responders in the battle against the new coronavirus.

Another 15 people tested positive for the virus, and there were no deaths, over the past 24 hours, the Maine Center for Disease Control reported.

More Mainers are getting in their cars and trucks now that coronavirus restrictions are beginning to lift.

An analysis of Maine Department of Transportation data shows traffic on Interstate 295 around Freeport and Brunswick on Friday was at least 55% higher than the first Friday in April, the Portland Press Herald reported.

Overall, vehicle counts were 41% lower in the first week of May compared with the same time last year.

Maine began reopening the economy on May 1, and retailers in 12 of 16 counties were allowed to open Monday.

The Maine Dental Association said dentists from all over the state have called on Democratic Gov. Janet Mills to change restrictions on dental care to include routine visits. The dentists said Maine is one of 11 states that hasn't allowed practices to reopen, and it's the only one without a reopening plan.

The dentists are planning a Wednesday event to highlight the importance of dental visits. They said the event will observe social distancing.

Lambrew said the state is waiting on updated guidance from the U.S. Centers for Disease Control and Prevention.

More than half of the workers who tested positive for the coronavirus at a food-processing plant in Portland showed no symptoms, Tyson Foods said.

Fifty-one workers and contractors who work in the plant tested positive but 31 individuals were asymptomatic and otherwise would not have been identified, the company said.

Testing took place between May 2 and 4 while the plant was temporarily closed for cleaning and sanitation. The plant resumed limited production on May 7.

Tyson has increased short-term disability coverage to 90% of normal pay until June 30 to encourage team members to stay home when they are sick. All told, about 403 people work in the plant.