Maine speaker drowns out rivals in bid to take on Collins 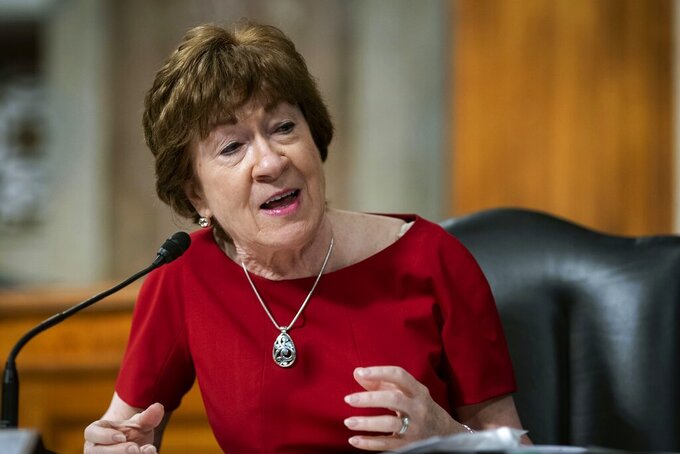 PORTLAND, Maine (AP) — It's great to be identified early as the establishment-backed candidate and to benefit from millions of dollars in donations.

It's not so great for the opponents.

Activist Betsy Sweet and attorney Bre Kidman have watched money pour into front-runner Sara Gideon's campaign for U.S. Senate in Maine, with cash piling up to the point that she's now raised the most of any political candidate in the state's history. Gideon's claims that she wants to get money out of politics ring hollow to them.

Maine Democrats will decide Tuesday between Gideon, Maine's House speaker and a candidate who's amassed $23 million in contributions, and two candidates who've had to claw and scrap to get attention in a world consumed by a pandemic. The winner will take on Sen. Susan Collins in the fall.

Collins, a centrist Republican seeking a fifth term, is a top Democratic target in this year’s election, and is viewed as freshly vulnerable in a state where a tradition of political independence is clashing with rising polarization and partisanship.

Democrats need to gain at least three seats to capture Senate control. Republicans are defending 25 of the 38 seats in play, even as President Donald Trump’s deteriorating standing in the polls jeopardizes GOP candidates around the country.

The DSCC endorsements bolstered the three campaigns and triggered waves of endorsements and donations. Both Hickenlooper and McGrath won their primaries on June 30.

The DSCC, focused on winning control of the Senate, wanted to coalesce support around what it deemed to be strong candidates.

But party activists have decried the Washington influence.

“That’s not how democracy is supposed to function,” Kidman said. “If we don’t choose our candidate, then we lose all say in how democracy works.”

Gideon already had the support of dozens of state and local officials before the DSCC endorsement because of her "record of putting Mainers first to bring down health care costs, fight the opioid epidemic and provide relief to taxpayers,” said DSCC spokeswoman Lauren Passalacqua.

Gideon was born and raised in Rhode Island and first ran for office for the Freeport Town Council after moving to Maine in 2004. A mother of three, she quickly rose in the Legislature to become speaker of the House, where she clashed with former Republican Gov. Paul LePage.

Sweet has been involved in Maine politics for more than 30 years, serving as director of the Maine Women’s Lobby and in other posts. Her campaign has made hundreds of thousands of calls to shut-in Mainers during the pandemic, and many voters heard from the candidate herself.

Kidman, the newcomer of the three, is a defense attorney who represents those who cannot afford a lawyer, and struggles with health insurance and student loans just like other Mainers.

Kidman drove 10000 miles (16,000 kilometers) across the state in a subcompact car with a missing hubcap to meet Maine residents. Raising and spending large amounts of money was contrary to Kidman’s values, and Kidman ultimately gave most of the campaign's remaining campaign money, $5,000, to help those impacted by the pandemic.

Both Kidman and Sweet, who has raised more than $600,000, support the “New Green Deal” and "Medicare for All" proposals. Both want police reforms and to ease college students' debt burden. Kidman wants to abolish prisons and Immigration and Customs Enforcement.

Sweet said she's gaining momentum, and sees a path to victory thanks to Maine's use of ranked choice voting.

If no one wins an outright majority in the election, then there will be an additional round of voting in which the third-place candidate is eliminated, and those votes are reallocated to the remaining field.

Gideon has largely ignored her Democratic competitors, focusing her attention on Collins. She said she's been working to create a grassroots campaign and to win endorsements.

She said she’s focused on reforming health care and working to fight climate change, though she has stopped shy of endorsing the “New Green Deal” or “Medicare for All” favored by liberal activists. These subjects, she said, are more complicated than boiling it down to an internet hashtag.

As for money, she said she's worked to ensure that the campaign has the resources it needs to compete against Collins. Despite the pandemic, she hauled in $8 million in the last quarter.

The backdrop of the race is all of the money that’s continued to flow despite a struggling economy with tens of thousands of Mainers unemployed. Kidman and Sweet have been on the sidelines as Democratic and Republican television ads have attacked Collins and Gideon.

Republicans have accused Gideon of playing it safe by shirking debate. She skipped many candidate forums, further frustrating her opponents.

“To me, democracy is showing enough respect for the voters to show up and be asked unscripted questions,” Sweet said.

It's only natural for Gideon's opponents to cry foul over the Democratic Party's handling of the primary, but it's no surprise Democratic leaders quickly came to view her as the type of candidate to help flip the GOP-controlled Senate, said Mark Brewer, a political science professor at the University of Maine.

After all, the establishment opted to back the only candidate of the three to have served in public office.

"They're going to do whatever they can to tip the scales in the favor of one candidate,” he said.