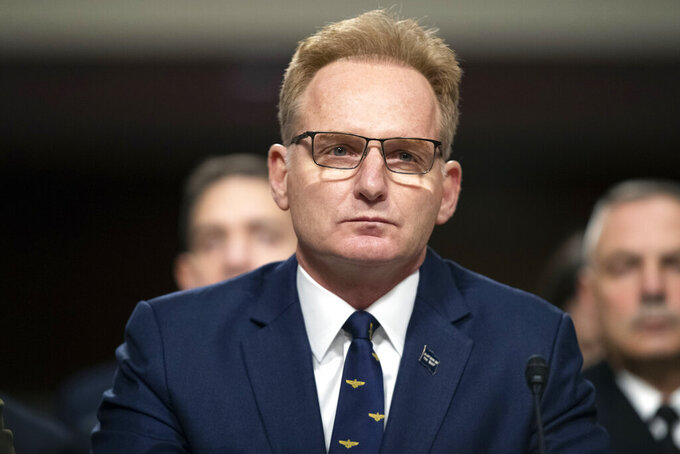 FILE - In this Dec. 3, 2019, file photo, acting Navy Secretary Thomas Modly testifies during a hearing of the Senate Armed Services Committee about about ongoing reports of substandard housing conditions in Washington, on Capitol Hill. Modly says the captain of the COVID-stricken aircraft carrier who was fired last week had betrayed his service and may have been “too naive or too stupid” to be commanding officer of the ship. Officials are confirming that Modly made the comments Sunday, April 5, 2020, to the ship's crew in Guam. (AP Photo/Alex Brandon, File)

PORTLAND, Maine (AP) — Maine's state primary can't safely be held in June as planned, and will likely be postponed until July 14, the state's governor said Tuesday.

Democratic Gov. Janet Mills said the postponement is about “taking every measure to minimize in-person contact” and avoid spreading coronavirus. She said election officials will try to make sure absentee balloting is utilized to the fullest extent possible when the primary does happen.

The state primary, which had been slated June 9, includes high-profile races such as the Democratic race for the right to run against Republican Sen. Susan Collins in November.

The number of people who have tested positive for the new coronavirus has surpassed 500 in Maine, according to the Maine Center for Disease Control. Another 20 cases of the new coronavirus were recorded and two more people died, bringing the total to 12 COVID-19 deaths, state officials said.

Mills also said the state will work with health care systems to set up care sites in Portland and Bangor that will free up hospital capacity. She said the plan calls for 100 new beds to be added at Cross Insurance Arena in Portland and at least 50 at Cross Insurance Center in Bangor. Mills said the state hopes “we never need to use these alternative care sites, but we cannot afford to wait to find out.”

A civilian worker at the Portsmouth Naval Shipyard died from complications associated with COVID-19, the Navy said.

The employee, who died on Sunday, was assigned to Submarine Maintenance Engineering, Planning and Procurement Activity at the shipyard in Kittery, the Navy said.

Both the Portsmouth Naval Shipyard, which overhauls nuclear submarines, and the Bath shipyard, which builds destroyers, are deemed essential to the nation’s defense by the Trump administration.

Democratic U.S. Reps. Jared Golden and Chellie Pingree on Tuesday called for the resignation of the Navy’s acting secretary for a profanity-laden attack on the ousted commander of an aircraft carrier dealing with the coronavirus.

Acting Secretary Thomas Modly's personal attacks on Capt. Brett E. Crozier “represent a profound lack of judgment and a callous strain of leadership that are beneath the office he holds,” Golden said in a statement.

Modly has submitted his letter of resignation.