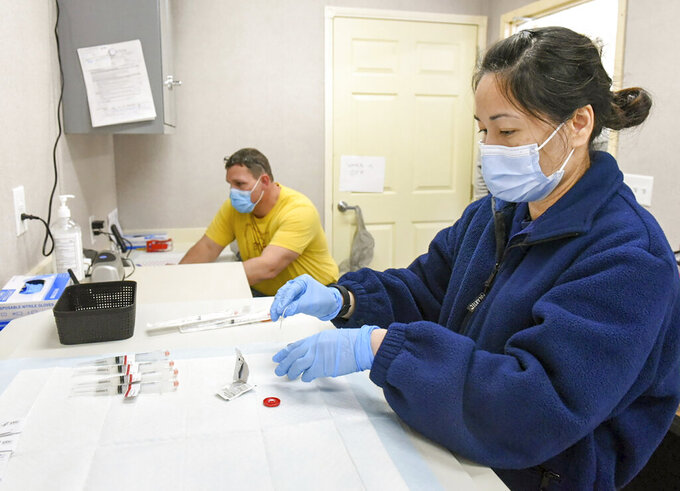 Quynh Tran, a clinical pharmacist from The Public Health Commission Corps, prepares a vial of Moderna vaccine on Tuesday, April 13, 2021, at a mobile vaccination unit currently stationed at the Oxford Casino, in Oxford, Maine. The clinic pivoted to administering the Moderna vaccine after the Johnson & Johnson vaccines were paused with guidance from the Center for Disease Control. (Andree Kehn/Sun Journal via AP) 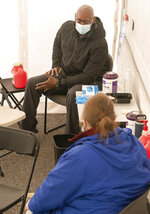 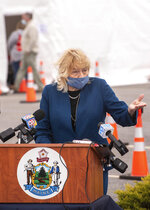 The U.S. Centers for Disease Control and Prevention cited six reports of a rare but dangerous type of blood clot in recipients of the vaccine, but none of those have been reported in Maine.

"Given this recommendation, the state of Maine is advising that providers pause administration of the Johnson & Johnson vaccine until the U.S. CDC’s scientific advisory committee has further reviewed the safety data,” according to a statement issued by Gov. Janet Mills, Health and Human Services Commissioner Jeanne Lambrew and Dr. Nirav Shah, director of the Maine Center for Disease Control and Prevention.

“We understand that this pause will impact Maine people who were scheduled to receive the J&J/Janssen vaccine,” Shah tweeted.

Also, the J&J vaccine was being used in the state's mobile vaccination unit that has been scheduled to travel to rural areas across the state. This week the mobile unit, which launched Monday, is in the parking lot of the Oxford Casino in western Maine.

Tuesday's appointments at the mobile unit that had been scheduled through 12:45 p.m. were canceled and will be rescheduled, Maine CDC said.

The state agency said it has redirected Moderna's coronavirus vaccine from another location to the mobile unit so appointments scheduled from 1 p.m. Tuesday through the end of the work week would remain unchanged. The agency said appointments for second doses of the Moderna vaccine would be scheduled.

Mills said the unit was sticking to its original travel schedule around the state and would be in Windham next.

“We are as determined as ever to get shots into the arms of people who need them in rural and underserved communities across Maine,” Mills said.

The state's plans to raise capacity limits on gatherings and events next month won't be impacted by the J&J pause, Mills said.

The Maine CDC also said residents who had appointments to receive the Johnson & Johnson vaccine at other clinics would hear from those clinics about rescheduling.

All told, more than 6.8 million doses of the J&J vaccine have been administered in the U.S., the vast majority with no or mild side effects.

In other pandemic-related news:

A college in Maine is giving students $50 tickets if they violate its mask-wearing requirement.

St. Joseph's College in Standish is ticketing the students, WMTW-TV reported. College spokesperson Oliver Griswold told the station St. Joseph's is “using all of the tools at our disposal to try to keep COVID off campus.”

The college has issued more than 20 tickets over the past two weeks. It instituted a “study in place” order during the fall semester as a result of a coronavirus outbreak.

The number of positive cases of the coronavirus rose in Maine.

The AP is using data collected by Johns Hopkins University Center for Systems Science and Engineering to measure outbreak caseloads and deaths across the United States.

The Maine CDC has reported more than 54,000 positive cases of the virus and 753 deaths.

A Maine hospital that serves eastern and northern parts of the state has received more than $900,000 in federal money to aid with its vaccine distribution effort.

The Federal Emergency Management Agency said Monday it gave the funding to the state of Maine to reimburse Northern Light Eastern Maine Medical Center in Bangor. The hospital, the largest in a largely rural part of Maine, operates the Cross Insurance Vaccination Center in Bangor.

FEMA said the funding is for personal protective equipment, supplies and other costs incurred as part of the vaccination effort. The money was awarded “to help reimburse expenses associated with the set up and operation of a COVID-19 community vaccination center,” the agency said in a statement.

FEMA will “continue to work closely with the state of Maine to support access to vaccines for all adults in America,” said agency acting regional administrator and federal coordinating officer Paul Ford.