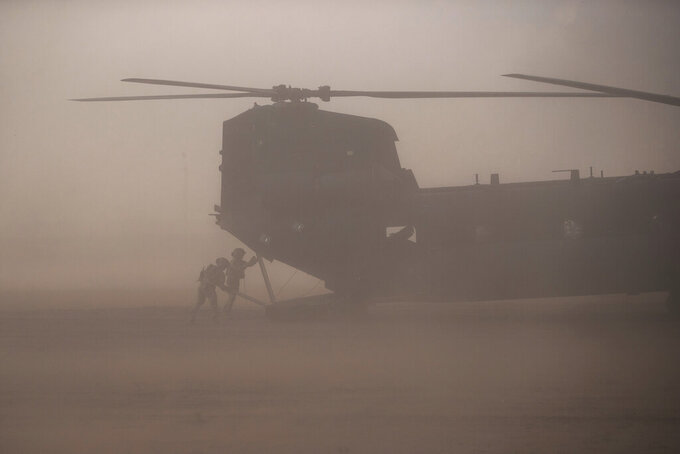 TAN-TAN, Morocco (AP) — More than 7,000 troops from the United States, African and NATO countries on Friday wound up a large-scale training exercise in the northwestern section of a continent increasingly threatened by Islamist extremists and military strife.

“It has helped our interoperability, our joint capabilities, and provided readiness and a good opportunity to build cohesion across the forces,” he said Friday.

But there was a hitch at the start, with Spain withdrawing from the war games citing budgetary reasons. Press reports however attributed the move to Spain's poor relations with Morocco, a former key ally.

The two countries have been at loggerheads since Spain took in the leader of the Polisario Front independence movement — Morocco’s No.1 enemy — for COVID-19 treatment in a Spanish hospital earlier this year. The Polisario is fighting for independence for the Western Sahara, a vast region that Morocco claims as its own.

During the exercise, Morocco held some airborne operations near the Western Sahara and not far from Polisario refugee camps in Tindouf, in neighboring Algeria.

“Those activities have been perfectly conducted and agreed upon between the two militaries,” Moroccan Brigadier Gen. Mohammed Jamil told The Associated Press.

Asked whether any action spilled into the disputed Western Sahara, Gen. Rohling said only that the locations “have not changed since the beginning of our construct of this exercise last year,” before the Spain-Morocco crisis.

Africa faces several potential crisis points, from inroads made by Islamic State, al-Qaida and Boko Haram fighters to power struggles and coups. In addition to the threat from Islamist extremists in the Sahel, militaries in places like the Democratic Republic of Congo and Central African Republic come under attack by other armed groups vying for control of the region’s mineral resources.

The participating countries were the U.S., Morocco, Tunisia, Senegal, Italy, The Netherlands and Britain. Observers also attended from countries including Egypt, Qatar, Niger and Mali.

Elaine Ganley in Paris and Krista Larson in Dakar contributed.