Malaysia coroner: No foul play in death of French-Irish teen 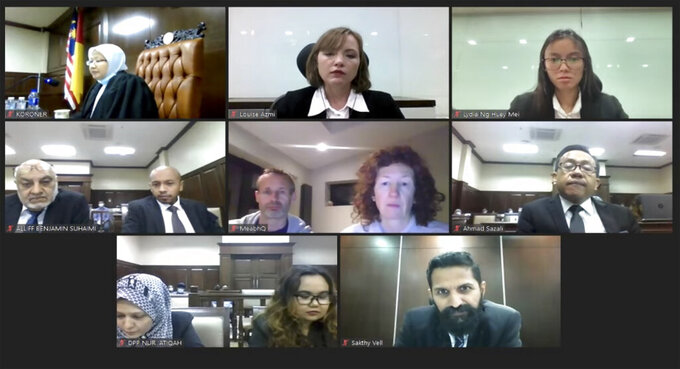 In this image from video released by Malaysian Judiciary, Meabh Quoirin and Sebastian Quoirin, center frame, mother and father of missing schoolgirl Nora Anne Quoirin, attend the verdict for inquest into the death of the Irish-French teenager, Monday, Jan. 4, 2021. A Malaysian coroner ruled Monday, Jan. 4, 2021 the death of the French-Irish teen, whose body was found near a Malaysian jungle resort where she vanished while on holiday, was most likely a misadventure that didn't involve other people. (Malaysian Judiciary via AP)

KUALA LUMPUR, Malaysia (AP) — A Malaysian coroner ruled Monday that the death of a French-Irish teenager whose body was found near a Malaysian jungle resort where she vanished while on vacation was most likely a misadventure that didn't involve other people.

Coroner Maimoonah Aid ruled out homicide, natural death and suicide and said Nora Anne Quoirin likely got lost after leaving her family's cottage on her own.

The 15-year-old disappeared at the Dusun eco-resort in southern Negeri Sembilan state on Aug. 4, 2019, a day after the family arrived for a vacation. After a massive search, her body was found on Aug. 13 beside a stream on a palm oil estate about 2.5 kilometers (1.6 miles) from the resort.

Police believed she climbed out of the cottage window on her own, with no evidence of any foul play. But her parents said she was likely kidnapped because she had mental and physical disabilities and wouldn’t have wandered off on her own. They told the inquest that a third party could have dumped her body in the area following the search operation for her.

The coroner described the family's suggestions as “nothing more than probably theory" with no evidence.

Nora Anne was wearing only underwear when she went missing at nighttime, but her body was found naked. The coroner noted the family's contention that this lent credence to the possibility of sexual assault but said an extensive autopsy could find no such proof, nor evidence of struggle or smothering.

Maimoonah also said there were no suspicious circumstances prior to the teenager's disappearance, no ransom request and no signs of intrusion into the family's cottage.

“I ruled that there was no one involved in the death of Nora Anne. It is more probable than not that she died by misadventure, i.e. that she had gone out of the (cottage) on her own and subsequently got lost in the abandoned palm oil plantation," the coroner said.

Nora Anne's parents, who were listening to the online verdict from their home in London, said in a statement that they were “utterly disappointed."

They said Nora was simply incapable of hiding in undergrowth or making her way out of the resort in the darkness unclothed. They said they had asked the coroner to return an open verdict, which would mean there was suspicion of foul play but inadequate proof to show so.

“We still believe this is the only appropriate verdict because, throughout the testimonies presented in this case, layers of (professional) evidence have confirmed what we always believed — that Nora was abducted," they said.

The family cited unidentified fingerprints found on the outside of a window in their cottage that was found open the morning of her disappearance, failure of hundreds of trained rescuers to find her initially and police dogs unable to follow Nora's scent.

They feared possible DNA evidence was lost because of the lapsed time and the finding of her body in water, and noted a lack of major physical damage to her body if she truly walked through the rough terrain.

They also said the possibility of sexual assault remained, even though there was no evidence of violent assault, and that her highly submissive nature ruled out any struggle.

“Once again, we see that justice struggles to support the most vulnerable in society, only engaging with special needs at a surface level," they said.

A British pathologist who performed a second autopsy on Nora Anne's body in the United Kingdom testified that he agreed with the Malaysian findings that she died of intestinal bleeding due to starvation and stress. However, he said he couldn’t fully rule out sexual assault due to severe body decomposition.

Maimoonah said Nora Anne, who was sleeping in the loft with her siblings, could have been woken by the heat or loud noises from a party at another cottage nearby and gone downstairs to find her parents.

But the coroner said the teenager may not have been able to open the heavy sliding door to her parents' bedroom. She could have opened the window by accident, Maimoonah said.

Rescuers may also have initially overlooked Nora's body due to the thick jungle terrain, Maimoonah added. The autopsy estimated that she died between two and four days before her body was discovered.

A total of 49 witnesses testified over 24 days since last August via video conferencing due to the coronavirus pandemic.