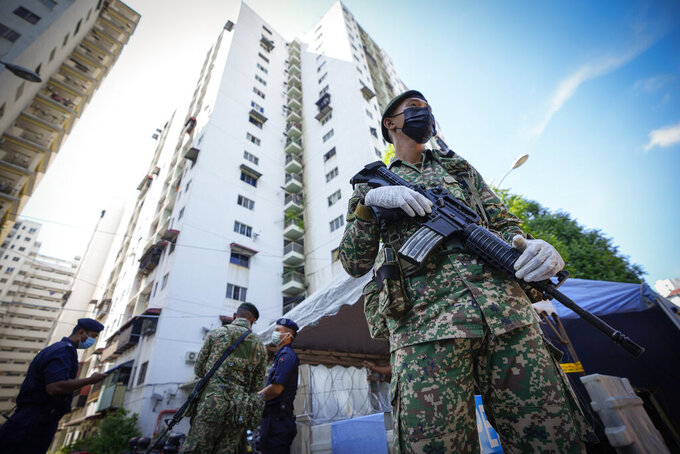 Armed soldiers stand guard outside Pangsapuri Permai, residential area placed under the enhanced movement control order (EMCO) due to drastic increase in the number of COVID-19 cases recorded over the past 10 days in Cheras, outskirt of Kuala Lumpur, Malaysia, Friday, May 28, 2021. Malaysia's latest coronavirus surge has been taking a turn for the worse as surging numbers and deaths have caused alarm among health officials, while cemeteries in the capital are dealing with an increasing number of deaths. (AP Photo/Vincent Thian)

KUALA LUMPUR, Malaysia (AP) — Malaysia's prime minister announced on Friday a near-total coronavirus lockdown in the country, with social and economic activities to be halted for two weeks to contain a worsening outbreak.

Prime Minister Muhyiddin Yassin said the decision to implement the lockdown starting June 1 came after new infections breached 8,000 on Friday for the first time, sparking fears the disease could spiral out of control.

The government earlier this month imposed a partial lockdown until June 7, stopping short of shutting down businesses to prevent a possible economic catastrophe. But new infections have climbed since the recent Muslim Eid festival, crossing 6,000 on May 19 for the first time and soaring to 8,290 on Friday.

This raised the country’s total cases to 549,514. The health ministry also reported another 61 deaths Friday, pushing the tally to 2,552 — nearly 40% recorded this month alone. Malaysia's total cases and deaths have jumped nearly five-fold compared to all of last year.

Muhyiddin said in a statement that all business activities will be shut down June 1-14 in the first phase of the full lockdown, except for essential services.

If daily cases fall, some economic sectors will be allowed to reopen in the second phase, which is expected to last four weeks, he said. After that, the country will return to current controls, with all businesses allowed to operate but not social activities.

Muhyiddin vowed that the government will bolster the healthcare system to ensure it doesn’t collapse and ramp up vaccinations.

This is the country's second nationwide lockdown in over a year. A lockdown last year badly hit the economy, and the government resisted growing calls for another large-scale lockdown but caved in after the runaway increase in new cases.

Earlier Friday, Senior Minister Ismail Sabri said many ethnic Malay Muslims violated COVID-19 safety rules that banned them from visiting each other during the Eid festival.

He said 24 Eid clusters have been detected with 850 confirmed cases. Many of the positive cases involved people who were asymptomatic, he said.