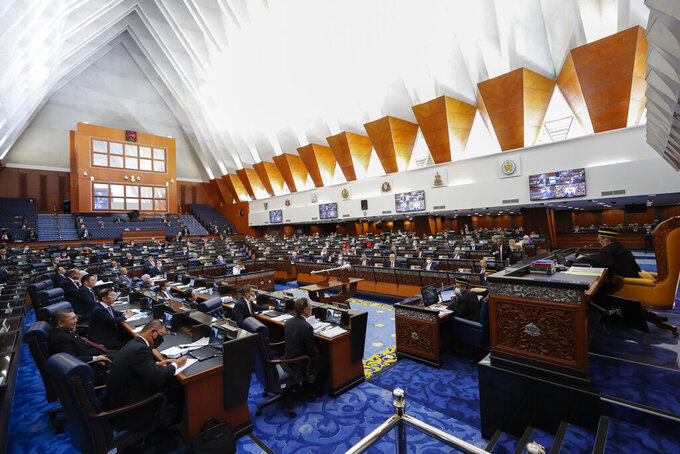 The move came as parliament resumed after months of delay because of the coronavirus pandemic. The success of the motion could thwart the opposition's bid for a no-confidence vote against Muhyiddin, analysts said.

Lawmakers engaged in heated debate over Muhyiddin’s unprecedented proposal to replace the house speaker with his own candidate. The government secured 111 votes against 109 for the opposition. One lawmaker was absent and another abstained as he presided over the session.

“The vote suggests that Muhyiddin's government has the numbers to stay in power. Replacing the speaker is crucial because it's the speaker who decides if a vote of no-confidence can go ahead," said James Chin, director of the Asia Institute at University of Tasmania in Australia.

“The vote also confirms what we know already, that is both sides are very close in terms of numbers and that Muhyiddin’s government is not stable," Chin said.

Muhyiddin’s legitimacy has been challenged by the opposition since he was sworn in on March 1 after a weeklong political crisis. Muhyiddin pulled his ethnic Malay party out of the governing alliance, triggering its collapse. He formed a Malay-centric government with the opposition, including the party of ex-Prime Minister Najib Razak, who is on trial on multiple graft charges.

Then Prime Minister Mahathir Mohamad resigned in protest of the plan and filed a motion of no-confidence against his former party ally.

“Given that the new speaker is nominated by Muhyiddin's government. I can bet that Mahathir will not to stand a chance in getting rid of Muhyiddin," Chin said. “Muhyiddin is now in a much stronger political position after this."

During the debate, governing lawmakers said it was normal procedure to appoint new officers aligned with the new government. But Mahathir said the speaker should be someone who is neutral.

He said Muhyiddin's move was unconstitutional because a replacement can only be made if the speaker dies or the seat is vacant, or after a general election. The 95-year-old Mahathir, a two-time prime minister, was heckled by government lawmakers who said he shouldn't have resigned in late February.

Mahathir earlier claimed he has the support of a majority of lawmakers but that some have been bribed to switch sides. The opposition has also recently failed to agree on who their new prime minister candidate should be, with Mahathir pushing for a candidate from East Malaysia and his former alliance opting for Anwar Ibrahim, who was slated to succeed Mahathir previously.

Lawyer Azhar Azizan Harun was later sworn-in on Monday to replace former senior judge Mohamad Ariff Mohamad Yusof as the new house speaker. Azhar formerly was the Election Commission chairman under Mahathir but quit the post to take up his new role.

Nga Kor Ming, an opposition politician who was one of two deputy speakers, later quit in solidarity with Mohamad Ariff before Muhyiddin could introduce a motion to replace him with a governing party lawmaker.

Mohamad Ariff told reporters later that his removal was extraordinary and may have set a new precedent in the Commonwealth. “Any speaker who becomes a speaker for the government only is not a proper speaker,” he said.