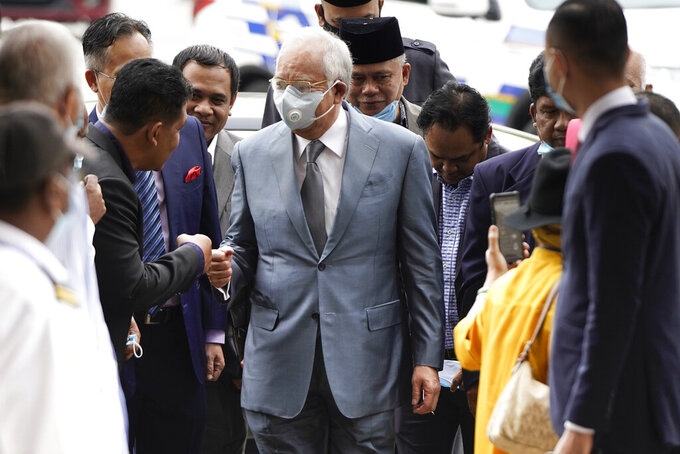 KUALA LUMPUR, Malaysia (AP) — Malaysian ex-Prime Minister Najib Razak was victimized by rogue bankers and should be acquitted of corruption charges linked to the massive looting of a state investment fund, his lawyers said Friday at the close of his first corruption trial over the scandal.

The High Court set July 28 to deliver its verdict, which will be closely watched as Najib’s Malay political party is reviving its fortunes. The party is part of a new government that took power in March less than two years after it was ousted in 2018 elections amid immense public anger over the 1MDB investment fund scandal.

Najib, one of the few Southeast Asian leaders to be arraigned after losing office, faces five criminal cases covering 42 charges of criminal breach of trust, graft, abuse of power and money laundering linked to 1MDB. Najib, 66, faces years in prison if convicted.

“We are very confident of a favorable outcome ... we have a good defense,” said defense lawyer Mohamad Shafee Abdullah after the hearing ended. Najib, wearing a face mask, left the courthouse without speaking to reporters.

The trial began in April 2019 over seven charges related to the transfer of 42 million ringgit ($9.8 million) from a former 1MDB unit into Najib’s bank accounts via intermediary companies between 2011 and 2015. Najib is accused of using his position to receive a bribe for approving a government guarantee for billions in loans to the 1MDB unit, SRC International, committing criminal breach of trust and accepting proceeds from unlawful activities.

Evidence has shown a complex trail of money through Najib’s bank accounts paid for renovating his home, was disbursed to political parties and paid for credit card purchases including a Chanel watch bought in Hawaii as a birthday gift for his wife and luxury jewelry in Italy.

In his defense, Najib has said he was unaware the money was from SRC because he was misled by rogue bankers led by Malaysian fugitive financier Low Taek Jho, who is wanted in the U.S. for his central role in the 1MDB saga.

Najib testified he assumed the money was part of an Arab donation arranged by Low to be used at his discretion for political and welfare activities. His lawyers said Low had used the donation as a guise to keep Najib from being suspicious of his plundering of the 1MDB fund.

Prosecutors argued Najib was the real power behind 1MDB and SRC as prime minister and finance minister at the time. They said it was a deliberate scheme by Najib to enrich himself with Low as his lackey and called the Arab donation “manufactured evidence” to cover up his tracks.

“We have proven our case beyond reasonable doubt," said prosecutor V. Sithambaram. He told reporters that the July 28 verdict is subject to lengthy appeals by both sides and that the final judgment will only come from the Federal Court, the country's top court.

Sithambaram said the change in Malaysia's government didn't affect the prosecution's case and that there was no order for them to back off against Najib.

Last month, prosecutors dropped money laundering charges against Najib’s stepson and “The Wolf of Wall Street” film producer Riza Aziz in a settlement of 1MDB-related claims that was slammed by critics as a “sweetheart deal” for him.

Investigations into the 1MDB scandal had been quashed by Najib's government, and its spectacular ousting in the 2018 elections ushered in Malaysia's first change of power since independence from Britain in 1957.

Najib has slammed the prosecution as political vengeance. The ruling alliance that ousted him collapsed in March with two-time Prime Minister Mahathir Mohamad resigning in protest over his party forming a Malay-centric government with Najib’s party and several others.

The king subsequently appointed fellow party leader Muhyiddin Yassin as the new prime minister despite Mahathir’s insistence that he has the support of a majority of lawmakers. Mahathir, 94, has called for a no-confidence vote against Muhyiddin that has been delayed by the coronavirus, and could be held at the next sitting of Parliament in July.