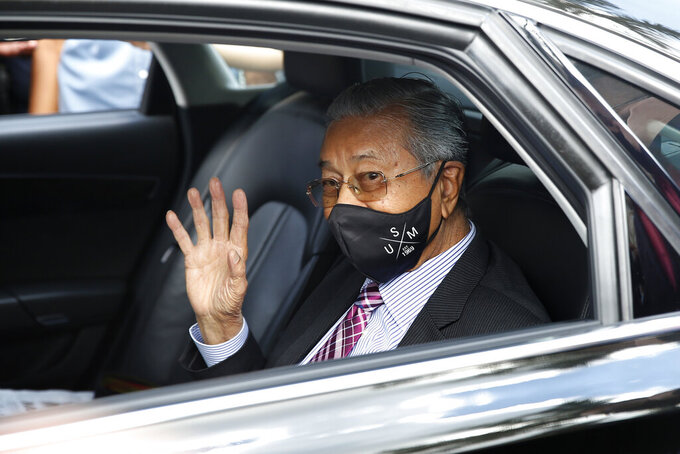 The king approved Prime Minister Muhyiddin Yassin's plan for an emergency in early January to curb the spread of the coronavirus, but critics said it was a political ruse to help the embattled leader stay in power amid challenges to his leadership.

The emergency involves no curfew or military powers but Parliament is suspended until Aug. 1. Muhyiddin's government remains in control and has extraordinary powers to introduce laws without parliamentary approval.

Mahathir, 95, accused Muhyiddin of using the king's name as a shield against critics, making many Malays angry with the monarch instead. He told reporters outside the palace gate that he hopes the king will heed the people's voices. More than 39,000 Malaysians have signed an online petition since March for the king to end the emergency.

“This declaration of a state of emergency is not about fighting COVID-19. Not at all ... it is about a weak government wanting to stay in power,” Mahathir wrote on his blog earlier in the day.

Muhyiddin took power in March 2020 after instigating the collapse of Mahathir's reformist alliance that won 2018 elections and joining with the opposition to form a Malay-centric government. But his government is shaky with a razor-thin majority in Parliament.

Muhyiddin faces challenges from within his coalition and from the opposition, but support for his leadership cannot be tested with Parliament suspended.

Critics said the emergency has failed to curb new infections, with Malaysia's total cases more than doubling to over 379,000 since January. Many also questioned why Parliament cannot resume since most restrictions have been lifted, with businesses, malls and schools reopened.

With no parliamentary oversight, the government introduced a new law to combat “fake news" about COVID-19 that critics say is a threat to freedom of expression. Another law allows the Finance Ministry to approve additional spending without scrutiny.

King Sultan Abdullah Sultan Ahmad Shah in February said Parliament can sit despite the emergency order, but Muhyiddin's government said it wasn't safe because there are many older lawmakers.

“For the people, the price to pay is horrendous. They lose their freedom of speech and their right to change the government," Mahathir wrote. “Whither the rule of law."