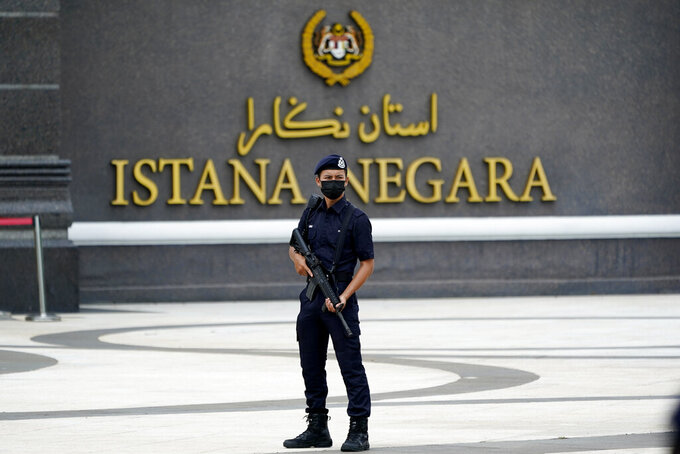 Armed police wearing a face mask to help curb the spread of the coronavirus stands outside National Palace in Kuala Lumpur, Malaysia, Sunday, Oct. 25, 2020. Malay rulers hold a special meeting on Sunday to discuss the government's plan to declare an emergency to tackle the worsening COVID-19 situation. (AP Photo/Vincent Thian)

KUALA LUMPUR, Malaysia (AP) — Malaysia's king on Sunday rejected a proposal by embattled Prime Minister Muhyiddin Yassin to declare a state of emergency to fight a new outbreak of the coronavirus.

The plan by Muhyiddin, which involves suspending Parliament, has sparked national outrage, with critics slamming the move as an undemocratic means for him to hang on to power amid challenges to his leadership.

The palace said in a statement that Sultan Abdullah Sultan Ahmad Shah “is of the opinion that there is currently no need for His Majesty to declare a state of emergency in this country or any part of Malaysia."

Hours later, Muhyiddin said the Cabinet took note of the king's decision and will further discuss the decree.

“The priority of the Cabinet and the government at this time is to protect citizens from the COVID-19 disease," he said in a brief statement. He also welcomed the king's advice to ensure his government's stability. Local media said the Cabinet is expected to meet later Monday.

Sultan Abdullah, who earlier Sunday conferred with other royal households on the emergency proposal, said the government has handled the pandemic well and believes Muhyiddin is capable of implementing measures to cope with the crisis. But the monarch called for a halt to “all politicking" that could disrupt the government's stability.

The king can declare a state of emergency that allows the country to be governed through ordinances that cannot be challenged in court.

Muhyiddin took power in March after instigating the cause of the former reformist alliance, but his government is shaky, with only a two-seat majority in Parliament.

Opposition leader Anwar Ibrahim has alleged that he has the support of a majority of lawmakers to topple Muhyiddin, but hasn't managed to secure the monarch's support.

Still, Muhyiddin faces a key test early next month when his government is due to seek approval for its 2021 budget in Parliament. If he is unable to pass the bill, pressure will build for him to resign or call new elections. A state of emergency could allow him to delay that vote and consolidate support.

The king said there was “no need for MPs to continue with irresponsible actions that can affect the stability of the government." He stressed that the budget is crucial in the fight against COVID-19 and to restore the economy, and urged Malaysians to unite to stem the virus's spread.

Many Malaysians praised the king's decision on social media. Despite the king's rebuff, his endorsement of Muhyiddin's government may help the premier get the budget bill passed.

Politicians from both sides of the divide as well as the Bar Council, the medical association and other groups have said there is no need for an emergency decree because there are sufficient laws to curb public movement and impose penalties to curb the virus. Some also have warned that declaring an emergency could plunge the country into a dictatorship and ruin the economy.

Some media outlets have cited sources as saying that Muhyiddin wanted an “economic emergency” to merely suspend Parliament, without any curfew. The last time emergency laws were invoked nationally was in 1969 during deadly racial riots.

Muhyiddin withdrew his party from Anwar's reformist alliance that won 2018 elections and joined with the opposition to form a Malay-centric government in March. Then-Prime Minister Mahathir Mohamad resigned in protest, saying he wouldn’t work with the corruption-tainted opposition that he ousted in 2018 polls.

Apart from Anwar, Muhyiddin also faces threats from the key ally in his ruling coalition, which is angry about being sidelined despite being the biggest party.