Man City a scene of grieving, activism as the EPL returns 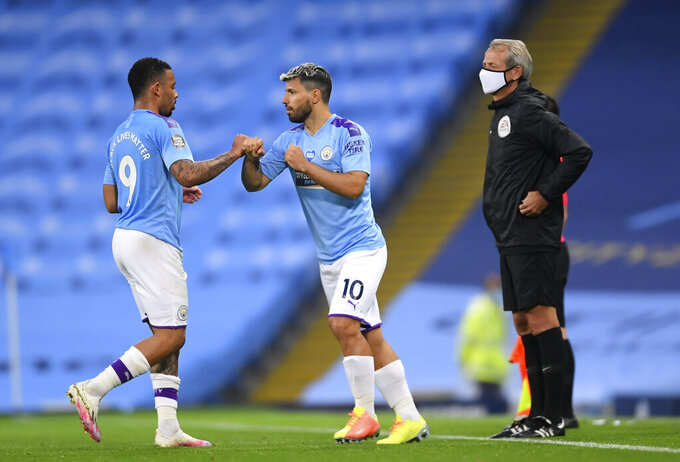 MANCHESTER, England (AP) — When Manchester City scored the first goals the Premier League had seen in 100 days, only medics were in the stands to applaud.

For the last three months, it has been the nation applauding the health workers.

In protective clothing, the on-duty medical staff were among only 300 people allowed into the Etihad Stadium for the game against Arsenal that helped to end the Premier League’s shutdown on Wednesday.

The 55,000 seats that would usually be filled were empty, mostly covered by banners. The only supporters seen celebrating goals from Raheem Sterling, Kevin De Bruyne and Phil Foden during City’s 3-0 win were on big screens in the stands, streaming live from their homes.

The screens were also used to mourn some of those who died during the pandemic. An image of Glyn Pardoe, a former City player and coach, was shown three weeks after the virus killed him at the age of 73.

“Together we have been facing a health emergency,” the City stadium announcer said. “Heroes have risen to challenges we never imaged.”

Premier League players, too, have been confronting the racism they imaged society would not still be facing in 2020.

Instead of names on the back of all player jerseys, there was the message: “Black Lives Matter." And before kickoff came a show of solidarity against the racial injustice in society reinforced by the death of George Floyd while being arrested in Minnesota.

Standing around the center circle, players took a knee — a powerful gesture unlike anything seen before in the league.

“I see it as a massive step by the Premier League to allow something like that to happen," said Sterling, who has emerged as English football's figurehead in the fight against racism. "It shows we’re heading in the right direction. Little by little, we are seeing change and that’s what everyone is hoping for, not just black players but the majority of the country.”

It was Sterling who scored the Premier League’s first goal since March 9 by capitalizing on an error by David Luiz in first-half stoppage time. The goal celebration featured a touch of elbows with teammates and a brief embrace to respect social distancing.

Substitutes also must remain two meters (6 feet) apart on the sidelines, leaving them sitting up in the stands closer to the press tribune than the bench. Two of them — Dani Ceballos and Luiz — had to enter in the opening 25 minutes after Granit Xhaka and Pablo Mari were injured.

Luiz also exited the game sooner than expected, sent off four minutes into the second half for bringing down Riyad Mahrez and conceding a penalty that De Bruyne converted.

There was no hiding place for Luiz or any player in this unique atmosphere for an English game. Every instruction from the bench and shouting among teammates — from the tactical to the flashes of irritation — were audible.

So too was the sound when City goalkeeper Ederson rushed out of his penalty area to clear the ball only to collide with teammate Eric Garcia. Medics, some in full white suits and face masks, spent 10 minutes on the field treating Garcia before he was carried off on a stretcher wearing an oxygen mask.

It was an alarming moment in a stadium where the few in attendance were on high medical alert.

City had already made all five substitutes — two more than usually permitted in 90 minutes. It is a temporary measure to allow clubs to cope with the congested match schedule and complete a season that at some points in April looked like it might have to be abandoned.

City knows it will be surrendering the Premier League trophy to Liverpool. This victory over ninth-place Arsenal just delayed the crowning moment until at least next week for a team 25 points in front of Pep Guardiola's City.

It was not the impending loss of the title on Guardiola's mind after the match, rather it was the discrimination highlighted by his black players.

“We should say that white people need to apologize, say sorry, for the way we treat the black people in the last 400 years or for centuries," Guardiola said. “I feel ashamed what we have done for these marvelous black people around the world.”