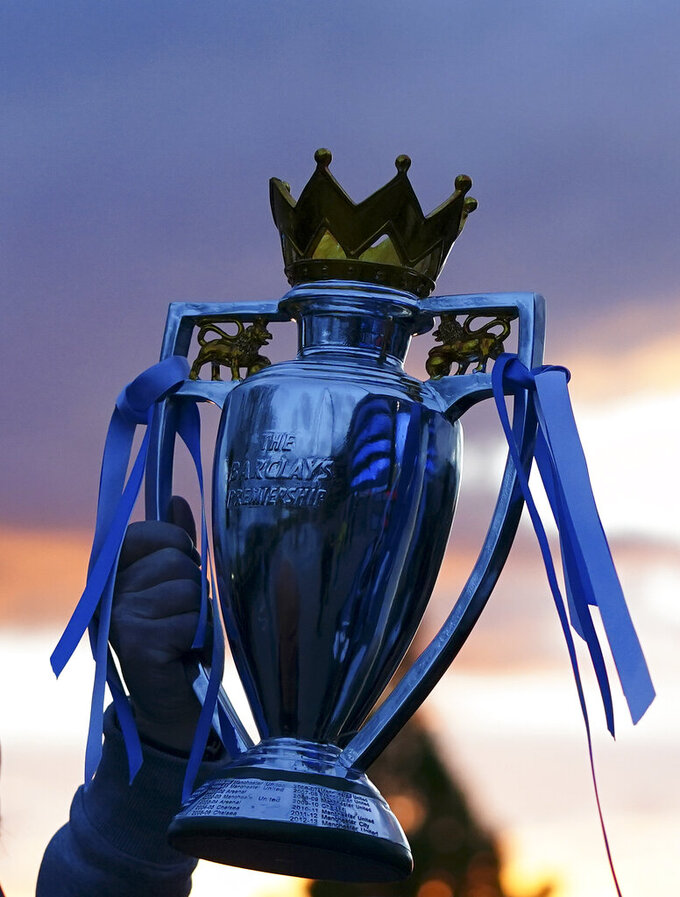 A Manchester City supporter holds up a replica of the English Premier League trophy as he celebrates outside the Etihad Stadium in Manchester, England, Tuesday, May 11, 2021 after his team clinched the title. City took the title after crosstown rivals Manchester United lost at home to Leicester City. (AP Photo/Jon Super)

MANCHESTER, England (AP) — Locked out of their stadium for a year due to the pandemic, Manchester City fans couldn't resist gathering outside, waiting for the moment they'd be crowned champions for the third time in four seasons.

It was a result not inside the Etihad Stadium but a few miles across Manchester at their fiercest rival and nearest Premier League challenger that confirmed the title was reclaimed on Tuesday.

Manchester United losing 2-1 to Leicester left City with an unassailable 10-point lead with three games remaining. Whereas United started the century dominating English football, now City is the force with five titles in 10 seasons and the biggest spenders on transfers and salaries.

While United fans gather outside Old Trafford in protest, at City they come to celebrate the 13 years of investment from Abu Dhabi that has transformed the fortunes of a club that was playing in the third tier until 1999 and won two English titles in the previous century — in 1937 and 1968.

Within minutes of the final whistle blowing at Old Trafford — after Çağlar Söyüncü’s 66th-minute header sealed the Leicester win that ended United's hopes of catching City — a “Champions” banner was unfurled over the entrance to the Etihad.

Soon, fans were setting off blue flares and parading small replica Premier League trophies. They will finally be allowed back into the stadium — up to 10,000 of them — to see City collect the real trophy after the final game of the Premier League season against Everton on May 23.

But it's not the first trophy they have seen City lift this season, with a fourth successive League Cup won in front of around 2,000 spectators at Wembley last month. And they could yet be allowed to witness, likely in Portugal, the team contesting its first Champions League final against Chelsea on May 29 when a treble could be completed.

“We have missed the fans so much,” City captain Fernandinho said. “We wanted to do this for them. We will enjoy this moment and we hope the fans do too. Rest assured we will continue to do everything we can to bring the Champions League home this season.”

Ending Liverpool's reign as champions gives Pep Guardiola a third Premier League title in four seasons, adding to the trio of domestic titles he won at both Barcelona and Bayern Munich as coach. And he could yet complete the season by ending his 10-year wait to win the Champions League again, just as he did twice leading Barcelona.

“This has been a season and a Premier League title like no other — this was the hardest one,” Guardiola said. “To come through this season — with all the restrictions and difficulties we’ve faced — and show the consistency we have is remarkable. It is relentless. Every single day, they are there, fighting for success, trying always to be better. They have been so, so resilient.”

In a congested pandemic-impacted season that stretched the resources of teams, City was eight points from the lead in November languishing in 11th place after eight games. But Guardiola turned City's campaign around, embarking on a 28-match unbeaten after losing at Tottenham in November.

The champions have conceded the fewest goals in the league — 26 — thanks to the resurgence in form of John Stones forming a center back partnership with Rúben Dias, who joined ahead of the season for 68 million euros (then $78 million).

They have also scored the most goals — 72 — even without playing with a recognized striker. Instead 16 players have scored, more than any other team, with a dozen goals provided by midfielder İlkay Gündoğan, who has been given more freedom to attack. No longer is City reliant on striker Sergio Aguero, who clinched the 2012 title in stoppage time but has only featured in 11 league games and scored twice.

Kevin De Bruyne remains an integral part of Guardiola's winning formula, setting up 11 goals to see him reach double figures for assists for the fourth time in six seasons.

The Belgium playmaker recently extended his City contract until 2025. While Guardiola is only signed up until 2023, it was signing on for another two seasons in November that ended uncertainty over his future.

Now seven-time champions of England, City still has a long way to go to overhaul United's record of 20 titles. Its neighbor hasn't won the league, though, since Alex Ferguson retired in 2013.

“Of course it's not the position we want to be in,” said United manager Ole Gunnar Solskjaer, who won the Premier League six times as a player under Ferguson. “We pushed (City) until the last 10, 12 days of the season. They have been lauded, and rightly so, as one of the best teams that's been in the Premier League. They've shown where the bar is. I want to congratulate Pep."

One shadow on the success is the specter of an ongoing Premier League investigation into whether the club owned by Sheikh Mansour — a member of Abu Dhabi’s ruling family — breached financial rules to secure the funding to assemble a squad packed with talent.