Man U worries soothed by new sponsor, certainty in Solskjaer 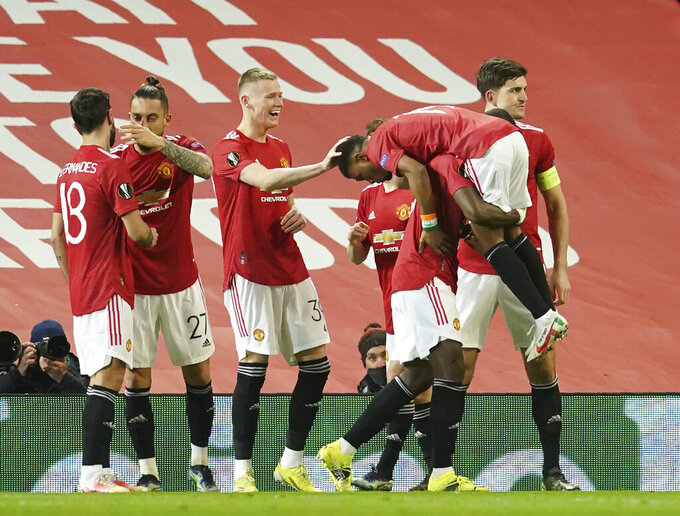 After grappling with the devastation and uncertainties caused by the pandemic, Manchester United is trying to look to the future with a new main sponsor and renewed certainty in Ole Gunnar Solskjaer's position as manager.

Chevrolet announced just before the coronavirus outbreak that it wouldn't be renewing as United's jersey sponsor after seven years, but the club's new backer is a reflection of the remote working enforced by the pandemic — including by the club's commercial team. The brand of remote-access computer software TeamViewer will be emblazoned on the shirts of the 20-time English champion from next season.

The five-year TeamViewer deal is expected to earn United more than $60 million a year. While the value is around a fifth less than the Chevrolet deal, Arnold said the club still had more than 10 potential sponsor options on the table.

“They weren’t the highest bidder,” Arnold said. “What they bring to us is way beyond money.”

He sees TeamViewer as helping to engage with fans who have been unable to attend matches over the last year while United briefly mounted its first credible title bid since last winning the Premier League in 2013.

A recent slump has allowed rival Manchester City to surge 14 points clear at the summit, but United is well placed to ensure securing Champions League qualification won't go down to the final day like last season.

When United was eliminated in the group stage of the Champions League in December, it raised new doubts about Solskjaer’s future. But the Norwegian has eased those concerns by keeping United second in the Premier League — despite the worst home start in 48 years — and seeing off AC Milan on Thursday to reach the quarterfinals of the Europa League.

The fourth permanent manager since Alex Ferguson retired in 2013 has the backing of the club's leadership, more than two years after replacing Jose Mourinho.

“Ole is the ultimate exemplar of ... someone in Manchester United who has tremendous character, is incredibly well connected with the culture and history of the club,” Arnold said. "No one in the world is happier than me with the phenomenal success he is bringing.

“When you’re inside (the club) and you are seeing the work of the man and the character, it just makes you so happy. He deserves to succeed, and he is, and that makes me very happy.”

Not only is there still the prospect of Europa League glory, but United remains in the FA Cup with a quarterfinal against Leicester on Sunday.

United will also hope some fans can return to Old Trafford before the end of the season in May for the first time since March 2020. A full return of matchday revenue is expected from the start of next season in August thanks to the vaccine rollout in the U.K. going better and faster than expected.

The closure of stadiums to supporters contributed to United’s revenue dropping 7% year-on-year to 281.8 million pounds in the six months to Dec. 31.

But as bad as the financial difficulties are, they haven't been as deep as the personal grief caused by the pandemic. The tragic consequences have hit Arnold closely.

“One of the uncles in our family who actually was a former Spurs player passed away from this disease,” Arnold said of Ian Fusedale, who died in April at the age of 75 after being diagnosed with the coronavirus. “It’s been a horrific, horrific time. So concentrating on the money side of things in the context of that is relatively minor.”