Many fear Trump's visit to Tulsa could spark violence 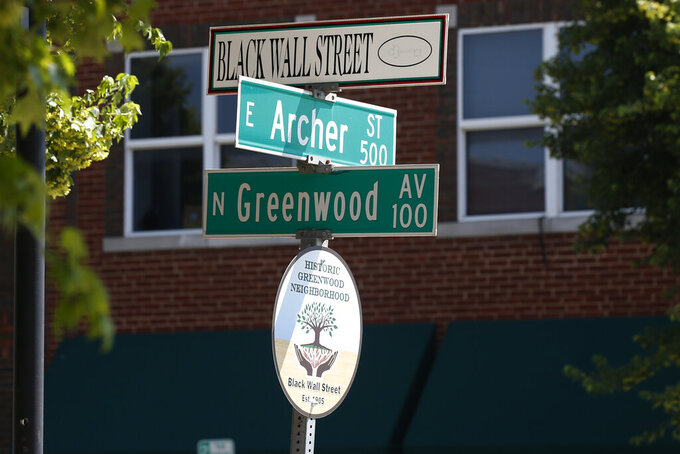 FILE - In this Monday, June 15, 2020, file photo, a sign marks the intersection of Greenwood Avenue and Archer Street, the former home of Black Wall Street, in Tulsa, Okla. Black community leaders in Tulsa said they fear a large rally by President Donald Trump in the city this weekend could spark violence, and the state's governor asked Trump not to visit the site of a race massacre where up to 300 black residents were killed by white mobs in 1921. (AP Photo/Sue Ogrocki) 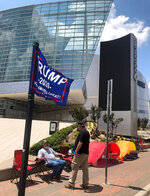 OKLAHOMA CITY (AP) — Black community leaders in Tulsa said they fear a large rally by President Donald Trump in the city this weekend could spark violence, and the state's governor asked Trump not to visit the site of a race massacre where up to 300 black residents were killed by white mobs in 1921.

Tens of thousands of Trump supporters are expected in Tulsa Saturday for the first of a series of rallies across the country to rev up his reelection campaign. The gathering at the 19,000-seat BOK Center, and at a 40,000-capacity convention center nearby, would overlap a two-day local celebration of Juneteenth, which marks the end of slavery in the country.

Both events are in the city's downtown area. The Rev. Al Sharpton is among the speakers at the Juneteenth observance in the Greenwood district, where several dozen blocks of black-owned businesses were burned in the massacre. A separate anti-hate rally is set for Saturday night in a Tulsa park about a 30-minute walk away.

Community leaders and organizers say all the events should be peaceful, but worry about the potential for clash involving Trump supporters, participants in several anti-Trump protests planned downtown, and those attending the Juneteenth program. Tulsa experienced several days of large protests after the death of black Minneapolis resident George Floyd May 25, but violence and damage were limited.

“We’re all terribly concerned,” said Rev. Ray Owens, pastor of the Metropolitan Baptist Church, a historically black church on the city’s north side. “I’m hearing rumors of people coming from both sides who may be inclined to incite some kind of physical conflict or war of words. That worries me.”

Wednesday, the QuikTrip convenience store chain announced the closing of its downtown area locations “out of possible safety concerns for our employees." Up to 250 Oklahoma Army National Guardsmen will be activated as a “force multiplier” for local, state and federal law enforcement providing security, said Tulsa Police Chief Wendell Franklin.

Tulsa's long history of racial tension was exacerbated in recent weeks by the arrest of two black teenagers for jaywalking. Another flashpoint was the fatal shooting of an unarmed black man, Terence Crutcher, by a Tulsa police officer in 2016.

“All of those things are the backdrop for Donald Trump's visit," said Marq Lewis, a black community organizer and founder of We the People Oklahoma. “His visit is definitely inflammatory."

Adding to the tension is fear about a recent spike in coronavirus cases in Tulsa and how it could be worsened by throngs of people cramming into downtown and indoor arenas.

Oklahoma’s Republican Gov. Kevin Stitt had invited Trump and Vice President Mike Pence to tour the city’s Greenwood district during their visit, then backpedaled after being told it was a bad idea.

He said he doesn't know what Trump will do. “That is something that will ultimately be the President's decision," Stitt said.

Trump supporters started arriving from around the country as early as Monday, some camping outside the BOK Center in the 90-degree-plus heat. Several acknowledged concerns about violence between rally goers and protesters.

“That is in the back of everyone's mind down here," said 41-year-old Trump supporter Delmer Phillips. “We know that if protesters show up, it could get nasty. That's ultimately what I fear the most."

State Sen. Kevin Matthews, a Democrat whose district includes the Greenwood area, said Stitt didn't consult community members before extending the offer. An appearance in Greenwood by Trump would be “a slap in face," he said.

Meanwhile, Franklin said there will be a massive police presence downtown Saturday.

“The eyes of the world are on Tulsa, Oklahoma, during this event and we are ready for it," he said.