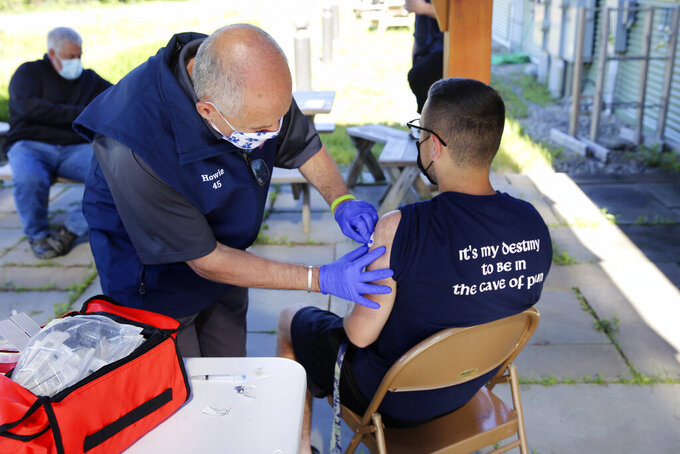 Howie McCausland, left, of the Mad River Valley Ambulance Service prepares to vaccinate Caleb Carrien, 19, of Barre, Vt., at a COVID-19 vaccination clinic held on Thursday June 17, 2021 in Waterbury, Vt. The state of Vermont was the first state to vaccinate 80% of the eligible population and a big reason the state reached the goal was by offering a variety of small, local vaccination clinics. The four-hour clinic at the the Waterbury offices SunCommon vaccinated seven people. (AP Photo/Wilson Ring)

WATERBURY, Vt. (AP) — A small, walk-in vaccination clinic held in Waterbury on Thursday is one of the reasons Vermont was able to be the first state in the country to give at least one COVID-19 vaccination shot to 80% of the eligible population.

On Thursday seven people were vaccinated at a pop-up clinic held by the Waterbury Ambulance Service outside the Waterbury headquarters of the solar power company SunCommon.

“I've been meaning to get it for awhile," said Brad Lewis, 38, of Williston who got the single-shot Johnson & Johnson vaccine on Thursday along with his employee Ben Smith, 28, of Bristol.

Lewis said his relatives, all of whom are vaccinated, have been urging him to get vaccinated. “I've been the odd man out," he said.

Smith said he wanted the single-shot Johnson & Johnson vaccine so he’ll be able to visit a relative in the hospital. When asked why he hadn’t done it before he said he really didn’t have a reason.

“This was the closest one,” he said when asked why he went to Waterbury.

Seven might not sound like much, but when the small numbers are multiplied by the scores or hundreds of opportunities across the state they add up to thousands of people protected against COVID-19. It's been enough for Vermont to reach 80%, the threshold that was crossed on Sunday.

Gov. Phil Scott had promised to lift all state COVID-19 restrictions when the goal was met. On Monday, he lifted the restrictions, and on Tuesday the state of emergency in place since the pandemic began was allowed to expire. But the state isn't stopping at 80%, continuing with dozens of clinics this week alone.

“They and the people staffing them were critical to our ability to meet people where they are," said Ben Truman, a spokesman for the Vermont Health Department. "These and all the vaccination options allow us to provide the widest range of vaccination opportunities, so that anyone can get their shot when and where it is convenient to them."

Initially after the vaccines began to be rolled out earlier this year it was a challenge to make vaccination appointments. Then as the eligibility expanded and people began to get vaccinated, the focus shifted to those who weren't as determined. Then the no-appointment clinics began to be offered at locations across the state, everything from hospitals, to racetracks, to farmers' markets to waste transfer facilities.

On Thursday, the University of Vermont Health Network said it was winding down three mass vaccination sites at the Champlain Valley Fairgrounds in Essex Junction and the Berlin Mall. A clinic at Porter Medical Center in Middlebury closed last week.

The focus will then be on the walk-in clinics available throughout the state, at pharmacies and primary care practices.

Mark Podgwaite, the executive director of the Waterbury Ambulance, said Thursday the shift to the walk-in clinics began in early May.

“Most of the guys that we do now are these guys,” he said referring to Lewis and Smith. “Males in that age range, ‘well, I’ll get to it' kinda deal, or they need to be persuaded or maybe they need a reason.”

After spending the morning at the SunCommon, Podgwaite and his crew were headed to the Waterbury farmers' market. Of the seven people vaccinated, he said he was “very pleased.”

“The threes, the fives, the tens are what made the difference,” he said.

The pandemic-related state of emergency has ended in Vermont's largest city.

Burlington Mayor Miro Weinberger and city officials formally announced the end on Wednesday and released a report about the city's response to COVID-19.

At the start of the pandemic, the city researched how Burlington responded to the 1918 pandemic and found that inaction puts lives at risk, Weinberger said.

“What I’ve learned over the last 457 days and what this community I think should long remember, is that even in the face of a seemingly insurmountable challenge, the people of Burlington are capable of forging incredible progress,” the mayor said.

The report is intended to help future generations.