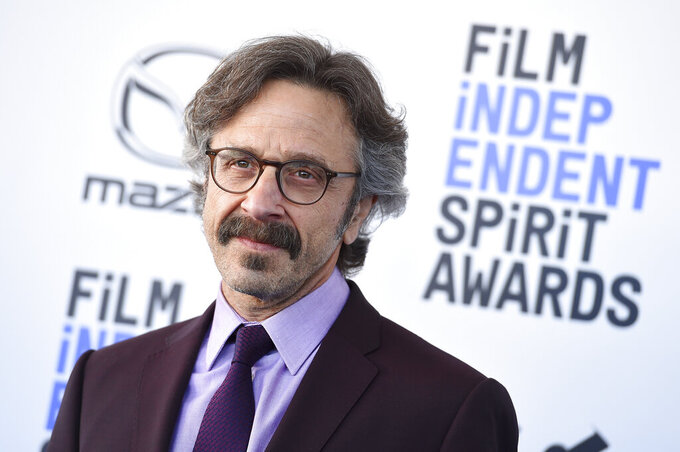 FILE - Marc Maron arrives at the 35th Film Independent Spirit Awards on Feb. 8, 2020, in Santa Monica, Calif. The podcast Maron started in his garage 12 years ago with producer Brendan McDonald will receive the Governors Award at the Podcast Academy's first-ever Ambies awards, which will stream Sunday, May 16, 2021, on YouTube and Twitch from Los Angeles. (Photo by Jordan Strauss/Invision/AP, File)

Now, Maron’s long-running podcast “ WTF with Marc Maron ” will receive the inaugural Governors Award at the Podcast Academy’s first-ever Ambies awards, which will be streamed Sunday on YouTube and Twitch from Los Angeles. The award recognizes a podcast or individual for their impact on the industry.

“I generally don’t win awards,” said Maron who was accompanied in a recent interview with Brendan McDonald, the co-creator and executive producer of “WTF.” Maron and McDonald will both accept the award during the ceremony.

“I like that they had to invent a new award for the medium that we succeeded in, in order for me to get an award,” said Maron, the comedian-actor who starred on the Netflix series “GLOW." “It feels like we deserve it and it feels like we earned it. And it is sort of amazing that we entered this with very little expectations.”

“WTF" was launched from Maron’s garage at his Los Angeles home 12 years ago. At the time, Maron was a struggling stand-up comedian, while McDonald was working two media jobs.

McDonald said the podcast provided an entry for them to create their own content without any concern of being fired.

“We like working together, we like making things together,” said McDonald, who manages the business aspects of the podcast and serves as the show’s sole producer and editor. He also produces podcasts for MSNBC.

“But everywhere we’ve done it, it’s been compromised,” he said, noting they approached “WTF” with a different mindset. "We were never thinking, ‘Let’s do this in a way to make oodles of money.’”

The twice-a-week podcast began with intimate conversations between Maron and fellow comedians about the highs-and-lows of their craft. Some of the most early memorable interviews included Todd Glass and Dane Cook.

Ultimately, “WTF” blossomed in popularity, drawing much bigger names — from Obama to David Letterman — into his cramped garage for humorous and sometimes therapeutic dialogue. (He moved the show to a more spacious garage a few years ago.) The show has had more than 1,200 guests including Chris Rock, Nicole Kidman, Jennifer Lawrence, Jerry Seinfeld, Bruce Springsteen and Kate Winslet.

Maron said major media outlets would report their news-making interviews, which helped with the rise of the independently-produced podcast. Since its launch, “WTF” has been downloaded 600 million times.

Some of Maron’s favorite moments include his recent chat with the sweatpants-wearing Jodie Foster, Paul Thomas Anderson opening up and Sean Penn, who made a joke about Nick Nolte.

McDonald said he and Maron didn’t expect the show to achieve so much success and longevity. He initially had a brief panic at the beginning of the pandemic last year, when there was a drop in audience numbers for their show and the rest of the industry.

But once the “little blip” ended, McDonald said their show endured then picked up steam.

Maron said the “pandemic interviews” provided an opportunity for him to hold insightful conversations, allowing celebs to feel comfortable enough to talk openly from the confines of their homes.

“I think they wanted to talk to people, they weren’t being managed as heavily and they weren’t like traveling around on a junket or stressed out or guarded," he said. "They were kind of excited to sort of, you know, talk and relax. And they’re in their own house, so they don’t have to drive anywhere. So there’s definitely a tone to some of the pandemic interviews that I don’t think could have happened in person or happened at any other time, given some of the talent we got.”

Maron believes the proven track record of “WTF” should have earned them more praise by other awards, but he appreciates the Ambies for making a concerted effort to create the podcast industry’s version of the Oscars and Emmys.

“We should have got a Peabody (Award) a long time ago,” Maron said. “I didn’t want anything else, but you know, whatever. Now that we have our own award, and we’re getting the big one, to me it’s like the Peabodys can go (explicit) themselves.”