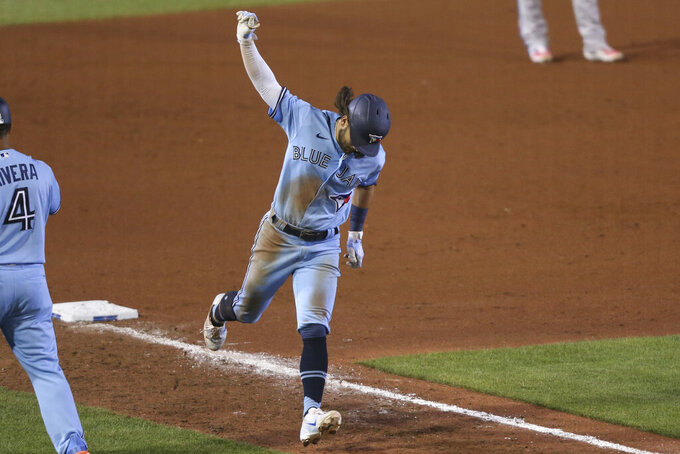 BUFFALO, N.Y. (AP) — If Magneuris Sierra and the Miami Marlins were looking for special souvenirs to bring home from their extra long road trip, they found them with a big extra-inning win and a hold on first place.

Sierra hit a go-ahead single in the 10th inning and the Marlins overcame Toronto’s seven home runs to outlast the Blue Jays 14-11 Wednesday night in the final game of their season-opening, three-week odyssey.

”It seems like the perfect game to end this trip, a game out of the ordinary,” Marlins manager Don Mattingly said.

After this detour to Sahlen Field, Miami finally gets to play its pandemic-delayed opener at Marlins Park.

Miami has an off day before facing Atlanta for three games to start a seven-game homestand. The Marlins’ grueling road swing began with a trip to Atlanta on July 21 for a pair of exhibition games and moved on to Philadelphia for a season-opening, three-game series.

The Marlins, however, had their return home delayed when an outbreak of COVID-19 occurred, forcing seven games to be postponed and a quarantine in Philadeelphia.

Despite the travel woes, the Marlins have had at least a share of first place in the NL East every day so far this season.

“This trip had a little bit of everything, right? We’ve hung in there. We’ve played pretty good ball," Mattingly said. “We had a disaster at the beginning in Philly. I don’t know how to describe it.”

"We had a fire alarm at the hotel last night at midnight. It just goes on and on, right? And then this game. It was a good trip from the standpoint of wins.”

Up 8-0 early, the Marlins watched Toronto rally to tie it. Marlins outfielder Jon Berti scored on Sierra's two-run single that made it 13-11.

“It will be exciting to get home and play in Miami,” Berti said. “What we went through is only going to make us stronger.”

Bo Bichette went 5 for 5 for the Blue Jays, a day after homering during a 10-inning win in their first game at their new Buffalo home. He connected again as Toronto became the fourth team in major league history to lose while slugging at least seven homers.

The Marlins. meanwhile, are the first National League team to win a game while allowing seven home runs.

Jesus Aguilar drove in four runs with three hits, including an RBI single in the 10th.

Travis Shaw hit two homers for the Blue Jays, including the 100th of his career. Teoscar Hernandez, Rowdy Tellez and Danny Jansen each hit two-run homers while Vladimir Guerrero Jr. and Bichette added solo shots. The last time a team lost while hitting at least seven homers came when the Chicago White Sox hit seven and fell to Toronto on June 25, 2016.

According to Stats by STATS, the Blue Jays are the first team in MLB history to have at least 18 hits and seven home runs in a game and still lose. In addition, Bichette became the first shortstop in the modern era to reach base safely six times, hit a home run and steal two bases in the same game.

Toronto last hit at least seven homers when they struck for eight in a 17-11 win against Tampa Bay on Aug 7, 2010.

Brian Anderson hit a three-run homer in the Miami first.

The two games in Buffalo might suggest that there’s a jetstream in the ballpark which, along with the win, could be enough to give the Marlins’ plane home a good push forward after squandering a big lead.

Bichette, who previously played at the field for Toronto's Triple-A affiliate, didn't agree.

“We just hit the ball well tonight,” Bichette said. “I don't think this park is doing us any favors, When I was here, it wasn't necessarily a hitters' park. I think every ball we hit (tonight) would have been out (of the park) anywhere.”

Brandon Kintzler (1-0) pitched 1 1/3 innings to earn the win. Josh Smith, the ninth pitcher utilized by the Marlins, worked the 10th and earned his first save.

Bichette drew a walk in the 10th, giving the Blue Jays two on with no outs, but Smith escaped the jam. Bichette is 13 for 29 (.448) during a seven-game hitting streak.

Marlins: Some of the Marlins players who were placed on the injured list last week following a COVID-19 outbreak have applied for reinstatement. “How long that takes, I’m not sure,” Mattingly said before the game. ... Reliever Mike Morin left the game after delivering only two pitches in the sixth inning. He retired Randal Grichuk on his first pitch and got a strike on Tellez, but arched his back with an apparent upper-body concern.

Blue Jays: After an off day on Thursday, Toronto will host Tampa Bay for a three-game series, with righthander Tanner Roark (1-1, 5.63) facing starting against fellow righty Tyler Glasnow (0-1, 5.56) for the Rays.