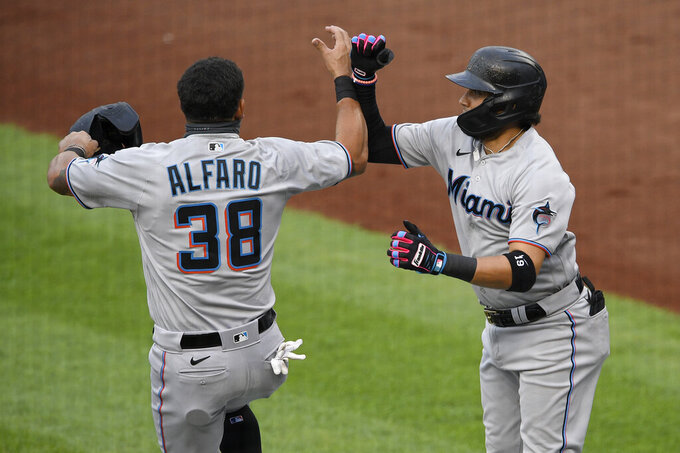 WASHINGTON (AP) — Miguel Rojas hit a three-run homer in his first at-bat after being activated from the COVID-19 injured list, and the Miami Marlins snapped a five-game skid by beating the Washington Nationals 3-2 on Friday night.

Rojas connected in the second inning against Patrick Corbin (2-2), and that was all Miami needed to take the opener of a five-game series. Rojas hadn’t played since July 26, when the Marlins’ season was suspended amid a team-wide coronavirus outbreak.

“It’s an unbelievable feeling, and I’m glad I got a good pitch to hit in my first at-bat and hit a homer to put us ahead,” Rojas said.

The 31-year-old Rojas was activated Thursday — when Miami’s game against New York was postponed after the Mets had two team members test positive. He was the first of the 17 Miami players sidelined by COVID-19 to return.

“I felt a roller coaster of emotions because I’ve been watching the games on TV and cheering on the boys on Twitter and trying to be as connected as I can,” Rojas said. “But it’s never the same feeling as when you’re playing the game with the guys on the field.”

The homer was Rojas’ second in four games this season.

“That pitch that was a homer was a heater,” Corbin said. “Fell behind 2-0 and it was right down the middle. Just a mistake there.”

Corbin allowed three runs and eight hits and struck out nine in 6 1/3 innings.

Brandon Kintzler pitched a 1-2-3 ninth to earn his fourth save.

2019 World Series MVP Stephen Strasburg was diagnosed with carpal tunnel neuritis on his throwing hand after seeing a nerve specialist on Thursday. Manager Dave Martinez says that surgery is an option for the Nationals star although a decision has yet to be made.

Manager Don Mattingly spoke afterward about the difference in pitching with a lead after that early Rojas homer.

“It was good to see,” Mattingly said. “We’ve had our struggles and again we’ve been trying to pitch from behind, we’re always chasing, trying to keep the game close. And, you know, it’s always better, when we get a little bit of a lead.”

Top prospect Jesús Sánchez made his debut in right field and batted eighth in the Marlins lineup. Mattingly said the 22-year old brings power, but he struggled in his first appearance, going 0 for 4 with three strikeouts.

Marlins: Catcher Jorge Alfaro became the second Miami player to return to the active roster after having COVID-19. Alfaro was in the lineup as the designated hitter and went 1 for 4. ... LHP Richard Bleier (triceps strain) was reinstated from the 10-day injured list, and utility infielder Eddy Alvarez was placed on the paternity list.

Nationals: INF Howie Kendrick was out of the lineup for the sixth straight game. Martinez said Kendrick was about 75-to-80% and hopes he’s available to pinch hit this series. ... 2B Starlin Castro had surgery Friday on his broken right wrist. ... LHP Sean Doolittle (right knee fatigue) thew a 24-pitch sim game Friday and will be reevaluated soon.

The Marlins have yet to announce either of their starters for Saturday’s doubleheader. Martinez said Max Scherzer (2-1, 3.71 ERA) will pitch in the opener while the second starter is TBD.