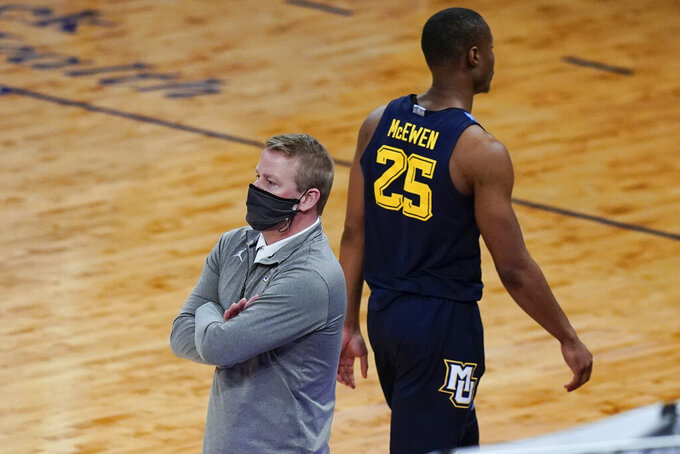 FILE - In this March 10, 2021, file photo, Marquette coach Steve Wojciechowski, left, watches the team play, while Koby McEwen (25) heads to the bench after fouling out of the game during the second half of an NCAA college basketball game against Georgetown in the Big East conference tournament in New York. Marquette fired Wojciechowski on Friday, March 19, after a seven-season tenure in which he went 128-95 but earned no NCAA Tournament victories(AP Photo/Frank Franklin II)

The Golden Eagles fired Wojciechowski on Friday after a seven-season tenure in which he went 128-95 but earned no NCAA Tournament victories. Wojciechowski was 59-68 in Big East competition.

Marquette went 13-14 this year, the first time it ended a season below .500 since 2014-15. The Golden Eagles’ season ended last week with a 68-49 loss to Georgetown in the first round of the Big East Tournament.

Marquette athletic director Bill Scholl said he and Wojciechowski had met at the end of the season to discuss a potential path forward but apparently couldn't reach a consensus.

“We reached one of those forks in the road where we didn't necessarily agree on what some of the right next steps were,” Scholl said Friday during a Zoom session. “That's when the decision was made that it's probably the right time to go in a new direction.”

Marquette likely would have earned an NCAA bid in 2020 if the pandemic hadn’t halted the season, though the Golden Eagles ended that year by losing six of their last seven games.

Scholl called Wojciechowski “a phenomenal guy” and credited him for bringing in good people and doing things the right way.

“In so many of the ways that you want to judge a program, he was truly hitting it out of the park,” Scholl said. “But at the end of the day, I believe a storied program like this and (with) the support we provide to it, I think competing pretty consistently at the top of the Big East certainly, a pretty regular stream of NCAA bids and the occasional opportunity to run deep in March, I think those are all things we as a program should aspire to.”

Wojciechowski played for Duke and spent 15 seasons as an assistant on Mike Krzyzewski’s staff.

After going 13-19 at Marquette in 2014-15, Wojciechowski led the Golden Eagles to winning records each of the next five years. He spent much of his tenure coaching Markus Howard, who ended his college career last season as the leading scorer in Big East history.

But he couldn't match the overall success of predecessor Buzz Williams, who led Marquette to a regional final in 2013 plus regional semifinals in 2011 and 2012. Williams left for Virginia Tech after the 2013-14 season and now coaches Texas A&M.

Marquette reached the NCAA Tournament as a No. 10 seed in 2017 and lost to South Carolina. Two years later, the Golden Eagles made it back as a No. 5 seed but lost to Ja Morant and Murray State 83-64.

After that season, Marquette suffered another blow when brothers Sam and Joey Hauser transferred, with Sam heading to Virginia and Joey leaving for Michigan State.

Marquette went 18-12 without the Hausers last year as Howard scored 27.8 points per game to lead all Division I players, but the Golden Eagles ended the season in a tailspin.

The Golden Eagles had an encouraging start this season by beating Wisconsin and Creighton when both those teams were ranked in the top 10, but they couldn't live up to that early promise.