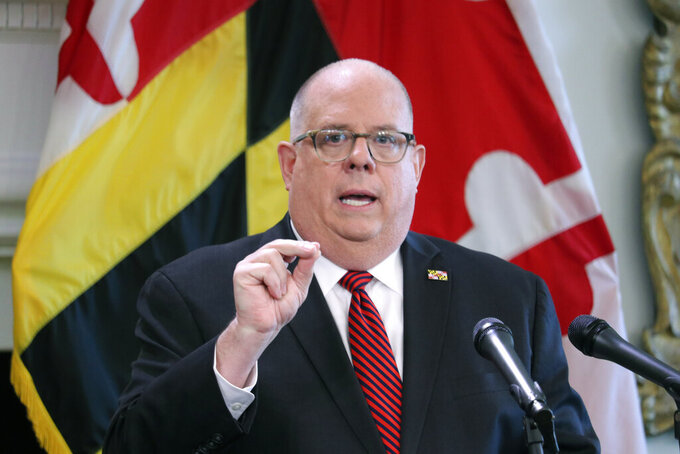 FILE - In this June 3, 2020 file photo, Maryland Gov. Larry Hogan announces he will lift an order that closed non-essential businesses during a news conference in Annapolis, Md. Hogan, who considered a primary challenge to President Donald Trump last year, announced Tuesday, July 7 he is releasing a book about national politics and his experience as governor. (AP Photo/Brian Witte, File)

ANNAPOLIS, Md. (AP) — Maryland Gov. Larry Hogan, who considered a primary challenge to President Donald Trump last year, said Tuesday he is releasing a book about national politics and his experiences as governor this month after its publication was delayed by the coronavirus pandemic.

Such books often serve as an introduction for politicians to a national audience and Hogan, a popular Republican in a heavily Democratic state, has not ruled out a run for his party's 2024 nomination.

Hogan said the book is called “Still Standing: Surviving Cancer, Riots, a Global Pandemic and the Toxic Politics that Divide America.” The book was initially scheduled to be published in June, but publication was delayed until July 28 and Hogan decided to add his experiences as head of the National Governors Association during the pandemic.

“It is about our combined successes in the face of extraordinary challenges – the inside story of moving beyond extremism, breaking partisan gridlock, and bringing people together to advance bold, common-sense solutions that have defined the last six years in Maryland,” Hogan wrote on his Facebook page Tuesday.

Hogan, wrote that he will begin hosting a number of virtual events and conversations with some prominent Republicans later this month. They include former Secretary of State Condoleezza Rice, and former Govs. Chris Christie, Jeb Bush and Arnold Schwarzenegger.

As NGA chairman, Hogan has led the group of governors amid tensions with the Trump administration in response to the pandemic. In March, for example, he criticized the administration for confusing messaging. Hogan said at the time that the president's timeframe for a national reopening appeared to be running on a schedule made of some “imaginary clock,” as states struggled to manage hot spots of the outbreak.

Hogan also clashed with the White House in April when the governor announced a $9 million purchase of 500,000 virus test kits from South Korea. Hogan said the Trump administration had made it clear that states had to “take the lead” on testing and “do it ourselves.” Trump criticized Hogan at a White House press briefing, saying Hogan didn't need to go to South Korea and “needed to get a little knowledge.”

In 2018, Hogan, who is term-limited, became only the second GOP governor in Maryland to be re-elected in a state where Democrats outnumber Republicans 2-1.

Hogan's book will include material about his challenging first year in office, which included riots in Baltimore after the death of Freddie Gray, a 25-year-old Black man who suffered a spinal injury in a police van.

Later that year, Hogan was diagnosed with B-cell non-Hodgkin's lymphoma in June 2015 and underwent chemotherapy. Last month, the 64-year-old governor announced he had his final, five-year anniversary PET scan, which confirmed he was still 100% cancer free.